Cote D’Ivoire’s constitutional council has certified results from last weekend’s presidential election despite calls for a recount, setting the stage for second round run-off which is expected to be a tense vote.

Challengers to Laurent Gbagbo, Cote D’Ivoire president, have urged authorities to hold a recount of ballots from the October 31 poll, citing irregularities they say led to hundreds of thousands of votes being tallied inaccurately.

But council president Paul Yao N’Dre – who is a member of Gbagbo’s ruling party – announced the certified result in a statement broadcast on national television on Saturday, and said the second round would be held on November 21, a week earlier than expected.

And in an implicit rebuff of the challenge to the vote, the council also released the definitive results for the first round.

“No claims concerning the regularity of the vote or a recount have been presented in writing to the president of the Constitutional Council,” said Yao N’Dre, speaking from the council’s headquarters in Abidjan.

The official results released by the council on Saturday differed very little from the provisional results issued by the electoral commission.

The two candidates in the second round would be ex-prime minister Alassane Ouattara and the incumbent President Gbagbo.

Ouattara’s communications adviser, Massere Toure, declined to comment on the news. She said Ouattara’s party will be meeting on Monday to determine its strategy.

Henri Konan Bedie, who was ousted in the country’s first coup in 1999, pledged before the poll to support Ouattara if there is a runoff. Amid calls for a recount, though, it’s unclear whether Bedie will stick to the pledge.

The charges of irregularities further polarised an already tense run-off that could restore stability to the world’s biggest cocoa producer after a decade of unrest.

The opposition coalition cited forged affidavits from polling stations, soldiers voting multiple times and party representatives being barred from the central counting station in Abidjan where national results were tabulated.

“All these irregularities led to the loss of hundreds of thousands of votes for the” Gbagbo’s opponents, said opposition coalition spokesman Djedje Mady.

International observers said in their preliminary reports they had detected no fraud, and cited only minor irregularities.

Bedie was the first to call for a re-count on Wednesday night, just before the final results were announced, but it was clear that he would not advance.

The ballot was the country’s first since civil war split Cote D’Ivoire in two, leaving rebels in control of the north. The country officially reunited in a 2007 peace deal, but deep tensions remain.

Powerful militias run loose in the largely lawless west, ex-rebels are still armed in the north, and political parties are backed by hardcore youth militants ready to take to the streets if things don’t go their way. 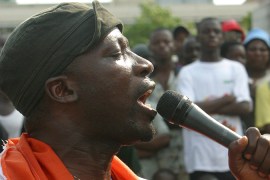 One of the most powerful political figures in Cote d’Ivoire talks about what independence has meant for his country.