At least 71 people have been killed in northwest Pakistan after two mosques were targeted by suspected Taliban fighters.

The first attack happened as Friday prayers ended and a man blew himself up in Darra Adam Khel, leaving 66 dead. Later just outside Peshawar, grenades were thrown into a mosque killing five people and wounding eleven. 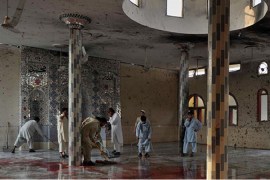