Georgia’s interior ministry said on Friday that the suspects, including a Russian intelligence employee and numerous Georgian military officers, had been providing confidential information on its armed forces to the Russian military’s foreign intelligence service, known as the GRU.

“This is a huge deal in terms of Georgia securing its military intelligence and a big blow to the GRU,” Shota Utiashvili, an interior ministry spokesman, told the AFP news agency.

Utiashvili said the Georgian suspects, who included military officers, air force pilots and local businessmen, had passed information on “military orders, the state of readiness and points of deployment” to GRU agents.

He said they spied on Georgia’s armed forces during the 2008 war between the neighbouring countries. Russian forces had invaded the country to repel a Georgian military attempt to retake the breakaway region of South Ossetia.

“These Georgian officers were passing on military secrets to the Russian citizens who were in liaison with the GRU, in some cases taking the information physically to Russia,” he said.

Utiashvili also said a Georgian security agent was able to infiltrate the group and obtain “all the security codes and the names of the people involved in the operation”.

According to the spokesman, the spy ring was centred on Georgia’s Black Sea region of Adjara, a former Moscow-backed breakaway province that Tbilisi regained control of in 2004.

Media reports of the arrests, which occurred in October, surfaced last week but officials refused to comment on them until Friday. The announcement of the detainments coincides with an annual day in Russia celebrating its military intelligence service.

A spokesman for Russia’s foreign ministry immediately denounced the arrests, describing them as “a political farce’.’

“Let’s wait, let’s see, how convincing this political farce will be before giving our commentary,” Grigory Karasin, a ministry spokesman, was quoted by the Russian state news agency RIA Novosti as saying.

Meanwhile, another foreign ministry official, who was not named, told the Interfax news agency that the arrests were an attempt to damage Russia’s reputation ahead of a Nato summit in Lisbon on November 19-20.

“We are deeply angered by the reports about the arrests of Russian citizens in Georgia and we are currently studying the situation,” the source said.

“This is a provocation showing another worsening of the anti-Russian psychosis of the Georgian leadership.”

Al Jazeera’s Neave Barker, reporting from Moscow, said relations between Russia and Georgia had been tense since the 2008 war.

“Particularly regarding the attitudes on different sides of the border regarding the future status of Abkhazia and South Ossetia, the breakaway regions of Georgia,” he said.

“Ever since the war, there has been a somewhat tense peace on that border. The fear is that any kind of escalation in diplomatic tensions potentially could spill over into violence.” 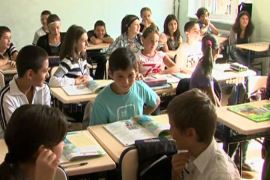 Georgia is replacing Russian with English as the country’s second language, two years after a major war with Moscow. 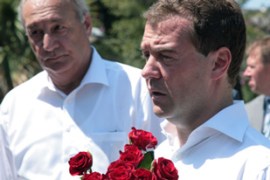 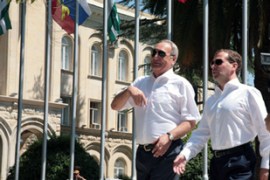 Medvedev pledges more support to breakaway regions on the anniversary of 2008 war.

Government urged to protect ancient sites after Unesco placed them on danger list.