Barack Obama, the US president, has assumed responsibility for failing to help implement domestic policies that would revive the country’s troubled economy and restore job growth at a faster pace.

Speaking at a news conference on Wednesday, he said he believes that voters are “deeply frustrated” at the slow pace of the economic recovery after they punished his Democratic party by handing control of the House of Representatives to Republicans in Tuesday’s midterm elections.

“Too many Americans haven’t felt that progress yet and they told us that yesterday,” he said.

The president pledged to find common ground with the Republicans on key issues but said he did not see the loss as a rejection of his agenda.

“After what I’m sure was a long night for lot of you – and needless to say it was for me – I can tell you, you know, that some election nights are more fun than others. Some are exhilarating. Some are humbling,” he said.

Obama said the result of the vote had confirmed what he had heard from people all over the country.

“People are frustrated. They’re deeply frustrated with the pace of our economic recovery and the opportunities that they hope for their children and their grandchildren,” he said.

The president said he did not see the loss as a repudiation of his policy choices.

He said that the “outcomes of those policy choices” are what voters were not satisfied with.

Republicans picked up at least 60 House seats on Tuesday, far more than the 39 they needed for a majority that is set to elevate John Boehner, a Republican congressman, to House speaker and put his party in charge of House committees.

Democrats managed to retain control of the Senate even as Republicans strengthened their ranks, which could herald an extended legislative stalemate when the new Congress begins work in January.

Al Jazeera’s John Terrett, reporting from Washington, said the House defeats are seen as “a rebuke to President Obama’s agenda and his Democratic party”.

Terrett said that in their aim to cut government spending and reduce national debt the Republicans “clearly think Americans are on their side – ‘the people’s priorities’, they call it.”

“But,” said our correspondent, “unless both parties can find common ground, legislative gridlock will follow when the new Congress convenes in January.”

Obama will now have to fend off attempts to repeal his healthcare and Wall Street reforms, and will face an aggressive pushback against his administration’s policies.

Boehner said on Wednesday that he planned to place reducing federal government spending at the top of Congress’ agenda next year.

“It’s pretty clear the American people want us to do something about cutting spending here in Washington and helping to create an environment where we’ll get jobs back,” he said at a news conference.

He also said he supported extending tax cuts brought in by George Bush, the former US president, for all income groups.

Republicans favour fully extending the lower rates while Obama and most Democrats back renewing them for the first $200,000 of everyone’s income.

The party’s victory means that the expiration of tax increases on dividends and capital gains for high-earners are also likely to be on the agenda.

Boehner also vowed to repeal healthcare reforms pushed into law by Obama, calling them a “monstrosity”.

“I believe that the healthcare bill that was enacted by the current Congress will kill jobs in America, ruin the best healthcare system in the world, and bankrupt our country”, said the Ohio Republican.

Al Jazeera’s Patty Culhane, reporting from Washington, said that Obama realises that “those big, sweeping proposals that he’d hope to get to in his first term” would now have to be shelved in the face of congressional gridlock.

The president, she said, “is promising baby steps”.

In his first public response to the election loss, Obama said: “No one party will be able to dictate where we go from here.”

With unemployment at 9.6 per cent, both the president and the Republicans will be under pressure to compromise.

Yet neither must lose faith with core supporters – the Republicans with the tea party activists who helped them win power, or Obama with the voters whose support he will need in 2012.

Obama also acknowledged that the Republicans’ big gains meant he would not have the votes to drive ambitious climate change legislation through congress, adding that some legislators lost their seats in the House partially for supporting a bill that would have curbed US greenhouse gas emissions.

The House passed the measure in 2009 but it did not get support in the Senate. 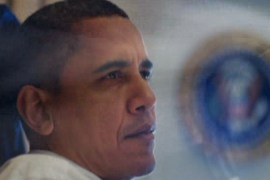 As US midterm elections begin, the president is finding his record under scrutiny. 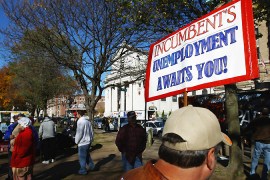