Indonesia’s Mount Merapi volcano has errupted in an explosion three times as powerful as an eruption last week that forced tens of thousands of residents from their homes.

Gas and molten lava were spewing from the volcano on Thursday on the island of Java, again making people flee to makeshift government shelters. At least 38 people have been killed since the eruption on October 26.

More than 70,000 people have already been taken in by the shelters or have left for other parts of the country, with the government warning that the pressure within the volcano may not yet have peaked.

No casualties have so far been reported from the most recent eruption.

“This is an extraordinary eruption,” Surono, a state volcanologist, said, adding that the blast was three times the force of the first eruption last month.

“It looks like we may be entering an even worse stage now.”

Surono had earlier said that energy in the crater could be easing, though rocks and debris were flying from the Mount Merapi.

Soldiers helped women and children climb onto trucks and drove them to safety.

Dust was strewn onto vehicles, homes and roads as far as 130km from the volcano.

The danger zone was widened from 10 to 15km from the peak because of the heightened threat.

Before this year Merapi last erupted in 2006, when it sent an avalanche of pyroclastic ash – hot gases and rock fragments – racing down the mountain and killing two people. 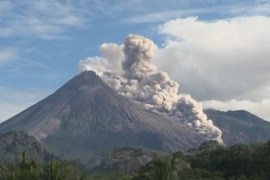 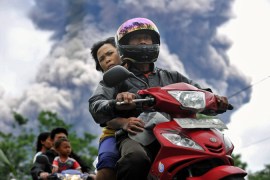 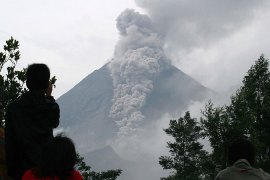 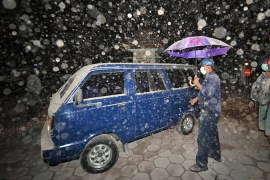