The Liberian president has dismissed her cabinet in a move officials say will provide a “fresh slate” for the government.

No other reason was given for Ellen Johnson-Sirleaf’s announcement on Wednesday but it comes amid a crackdown on corruption in the West African state that has led to investigations of some public officials a year ahead of presidential elections.

“President Johnson-Sirleaf told the ministers that the reason for demanding their mass administrative leave is that this administration is entering a critical stretch and this would afford her the opportunity to start with a fresh slate going forward,” a government statement said.

“The president further announced that a cabinet restructuring will be made in the shortest possible time and that several ministers could be reappointed.”

The statement also said that deputies will take over the ministers’ responsibilities until replacements are nominated, and that only the minister for presidential affairs had been asked to stay in his post.

Analysts say the move may be part of Sirleaf’s strategy to improve her chances in next year’s election.

“Patience with her government is wearing thin over the issue of corruption,” Joseph Lake of the London-based Economist Intelligence Unit, told Reuters news agency.

“She faces a strong challenge in the 2011 presidential election from local hero George Weah and this may be an effort to freshen up a weary cabinet.”

Sirleaf has been in power since 2006 and was expected to seek another term in the planned 2011 poll.

Critics of Sirleaf’s administration say she has not done enough to crack down on corruption or ease tensions between communities divided by 14-years of civil war – one of Africa’s bloodiest – that left the country’s infrastructure in ruins.

Last month, the government said it was investigating some current and former public officials for their role in a proposed carbon deal that would have given a UK firm control of a fifth of the country’s rainforests.

Liberia is near the bottom of the UN human development index but its oil and minerals resources are drawing increased foreign investment from energy and mining companies like Chevron and BHP Billiton that Sirleaf and her government hope will trickle down to improve the lives of local residents. 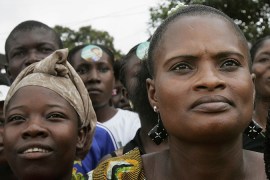 An all female UN team from India provides hope for young women in a country troubled by conflict and poverty.