Tuesday’s raid, which lasted an hour, had to do with “operations by one of the bank’s clients in 2008” and did not “affect day-to-day activities”, the National Reserve Bank said in a statement.

Lebedev was in his National Reserve bank when up to 30 armed Moscow city police officers surrounded the building and entered the premises, according to Artyom Artyomov, Lebedev’s spokesman.

Police confiscated documents from two of the bank’s offices including the headquarters, he added.

“They are looking for something, but I have no idea for what,” Lebedev said. “We have absolutely no idea what is going on.”

Masked gunmen, representing the government, are often used in various raids against businesses.

Viktor Biryukov, a police spokesman, told Interfax news agency the raid was part of a criminal probe, into an “earlier opened criminal case”. He did not elaborate or name any suspects.

A statement from the National Reserve Bank said the raid was connected to operations by one of the bank’s clients in 2008 and had nothing to do with the bank’s current operations.

The RIA Novosti news agency reported the police seized documents from the bank, in which Lebedev’s National Reserve Corporation owns a 78-per cent stake.

Lebedev, a former KGB spy who once worked at the Soviet embassy in London, built a fortune by trading securities in the chaos that followed the 1991 collapse of the Soviet Union.

Artyomov dismisses the notion that politics may be behind the raid: “I don’t see politics in this … It’s simply Russian idiocy.”

Lebedev is worth $2bn and is the world’s 488th richest person, according to the latest global rich list published by Forbes magazine.

Together with Mikhail Gorbachev, the former Soviet leader, Lebedev is co-owner of the Russian opposition newspaper Novaya Gazeta, where journalist Anna Politkovskaya wrote until her murder in 2006.

Lebedev has a number of media assets in Britain, which include the London Evening Standard and The Independent. 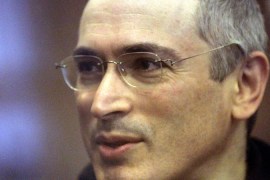 Khodorkovsky in final plea to court

Former oil magnate tells Moscow court he is ready to die in jail for his beliefs as he awaits verdict on theft charges. 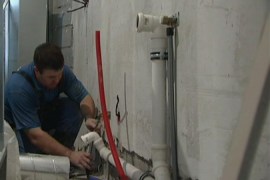 Corruption has become institutionalised and small businesses find that bribes are required at every turn.