As the Yemeni government began to hunt for suspects connected to an apparent plot to send computer printers packed with explosives to Jewish worship sites in the United States, the international media has turned a magnifying glass on the global shipping industry, whose weaknesses the plotters may have hoped to exploit.

Qatar Airways confirmed on Sunday that one of the two bombs discovered on Friday had been delivered to Dubai via the Qatari capital, Doha, on two passenger flights. With authorities in Britain saying that the other bomb – found at East Midlands airport in Nottingham – had the capability to explode in midair, the Qatari revelation raises the possibility that two plane-loads with potentially hundreds of people on board may have been at risk.

Security experts have described the shipping industry as a weak spot in efforts to counter extremist attacks on civilians. With tens of millions of packages circulating the world every day, and cargo undergoing less strenuous screening than passenger luggage, the industry seems to be a comparatively easy way to smuggle explosives.

Such shipments are “almost an easy target” for al-Qaeda and other groups seeking to stage spectacular attacks, Al Jazeera’s Dan Nolan, reporting from Dubai, said.

Even in the United States, where the Transportation Security Administration is attempting to comply with a law that requires the agency to inspect every piece of cargo stowed on passenger flights, only around a third of the material on non-passenger flights is screened, Nolan said.

UPS and FedEx, the two shipping companies used to transport the bombs in the Yemen plot, together move approximately 23.1 million items a day.

Both operate in more than 200 countries, and UPS ships two million packages and documents daily to and from addresses outside the US.

The two packages discovered on Friday were sent from Yemen and addressed to synagogues in Chicago.

They were discovered not through routine screening by government or airline workers, but because intelligence agents operating in several countries sniffed out the plot and alerted swift-acting authorities in England and the United Arab Emirates.

While the packages were halted before they wound up on the doorstep of Jewish houses of worship, Monday’s revelation that one of them was stowed on two separate Qatar Airways passenger flights means that disaster may have been avoided only by sheer luck.

David Cameron, the UK prime minister, said on Saturday that the bomb found at East Midlands Airport “was designed to go off on the aeroplane,” though he said there was no evidence yet that it was meant to explode over British soil.

More than half of the international air cargo entering the United States is carried on passenger flights, the UK Daily Mail newspaper reported.

Akbar Al-Baker, the chief executive officer of Qatar Airways, told Al Jazeera on Sunday that his company should not be held responsible for the presence of a bomb on two of its passenger flights.

“Quite frankly, I don’t know what else there is for us to do,” he said. “We are doing our best, but the major [obligation] in the field of safety and security is on the part of regulators and the governments.”

The brown cardboard box sent from Yemen to Dubai, which in addition to a computer printer packed with explosive powder contained Yemeni souvenirs and textbooks, should have been inspected at its point of origin, by FedEx and the government of Yemen, Al-Baker said.

The claim that the explosive found in England was designed to explode in midair “does seem slightly at odds with the knowledge that these packages were addressed to synagogues in Chicago”, Al Jazeera’s Tim Friend, reporting from London, said.

But the international scare does show how much the job of ensuring a safe shipping system depends on intelligence reports instead of screening procedures, Friend said.

“The questions are starting to pile up now about the inadequacy of the screening that is going on,” he said.

According to the UPS website, the company maintains four locations in Yemen; in Sanaa, the capital, and in Aden, Taiz and Al-Hudaydah. FedEx only lists one location, in Sanaa, which is operated under contract by the Falcon Aviation Group, a freight shipping company that has operated in the Middle East for 12 years and delivers to military bases across the Gulf, according to its website.

A Falcon Aviation worker who answered the phone at the business’s headquarters in Dubai said that a company-wide email instructed employees to refer all calls about the parcel bomb plot to a FedEx spokeswoman at the company’s corporate headquarters in the United States. A message left at the number was not returned.

According to Britain’s Express newspaper, the first sign of the plot was discovered by a unit of the UK government’s Communications Headquarters – a service that monitors so-called signal intelligence – stationed in Afghanistan. The unit, operating in a converted shipping container in Helmand, reportedly overheard al-Qaeda code words indicating that a bomb was in transit.

However, the US government has praised Saudi Arabia for delivering the tip that led to the plot’s unraveling. The exact role the Saudis played remains unclear. The Saudi embassy in Yemen, coincidentally, is located roughly 1,000 metres from the Falcon Aviation/FedEx office in Sanaa.

Dubai police intercepted the explosive-packed printer at a FedEx sorting facility on Friday. They released images showing the HP’s ink cartridge stuffed with a white powder and portruding wires.

Police said the powder contained pentaerythritol tetranitrate, or PETN, the same explosive substance used by 23-year-old Nigerian Umar Farouk Abdulmutallab, who tried to detonate a device in his underwear while on board a passenger flight over the US on December 25.

Plastic explosives like PETN are odourless and almost impossible to detect using X-rays. But Jennifer Rasamimanana, a spokesman in the Gulf for the US state department, said that Friday’s events and the co-operation leading up to the plot’s discovery represented a victory.

“What it shows is that when governments work together, we can thwart these plots no matter how sophisticated they may be,” she said.

Rasamimanana said that investigations into the bombing attempt were moving forward in many countries and said the US is “taking a look” at cargo screening procedures.

Separately, the United Arab Emirates’ civil aviation authority ruled out on Sunday that an explosive device was aboard a Boeing 747-400 jet operated by UPS that crashed in Dubai in September.

Two crew members died when the cargo flight, which was en route to Cologne, Germany, crashed shortly after taking off in a military compound near Dubai’s airport on September 3. The pilot reported fire and smoke in the cockpit. The GCAA said its investigation into the crash was continuing, while Nolan reported that authorities are looking into whether a shipment of lithium batteries may have played a role.

“The General Civil Aviation Authority (GCAA) investigation team … has concluded that there was no presence of acoustic evidence or any forensic signature supporting the detonation of an explosive device,” the GCAA said in statement on its website. 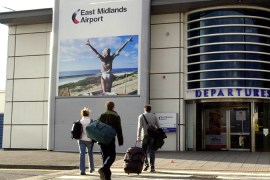 Assessment made after discovery of “viable explosive device” that could have brought down cargo flight. 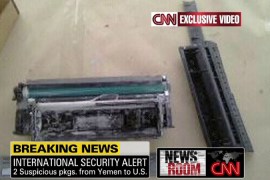