Nobel Peace Prize laureate Desmond Tutu has retired from public life on his 79th birthday, after decades of struggle and activism, primarily against apartheid in South Africa, and more recently on other global issues.

The former Anglican archbishop of Cape Town said that after his birthday on Thursday, he would limit his time in the office to one day per week until February 2011.

“Instead of growing old gracefully, at home with my family reading and writing and praying and thinking, too much of my time has been spent at airports and in hotels,” Tutu said in a statement when he announced his retirement earlier this year.

South African media reported that Tutu and his wife were marking his birthday and retirement with a voyage around the world on Semester at Sea, a study ship that serves as a travelling university and residential home.

After receiving the Nobel Peace Prize in 1984, Tutu used his international stature to step up the campaign against apartheid, leading calls for punitive sanctions against South Africa as one of the few strong voices inside the country, while others were imprisoned or forced into exile.

Tutu was ever-present during the turbulent final years of apartheid and the ensuing transition to majority rule, praying and sermonising after massacres.

For more than two years, the panel listened to people testifying about torture, killings and other atrocities during the apartheid era.

Tutu, often described as the “conscience” of South Africa, has always been forthright in his views on the situation at home and abroad, speaking out against the ruling African National Congress and Jacob Zuma, South Africa’s president.

Under apartheid, Tutu was strongly critical of Israel’s military and other connections with South Africa, and has since continued to voice his opposition to Israeli occupation and policies towards the Palestinians, calling them “Israeli apartheid”.

Widely regarded as a global moral arbiter, Tutu is now an active and prominent proponent of the campaign for divestment against Israel, arguing that it “could never live in security by oppressing another people”.

Tutu said that his departure from public life aims to clear the way for new talent to blossom, but he will stay involved with the Nobel Laureate Group and the Elders, a group of international statesmen and women brought together by former South African president Nelson Mandela.

Dan Vaughan, manager at the Desmond Tutu Peace Office in Cape Town, told the Times newspaper that Tutu would only honour those appointments that had already been scheduled.

“He is quite determined to retire, even if he will sometimes say something in public or make an appearance or two,” Vaughan said. 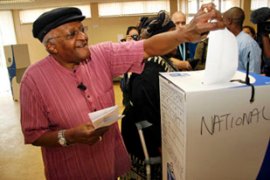 Tutu to retire from public life 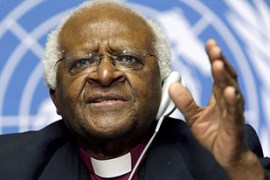 Archbishop accuses West of “silent complicity” in the suffering of Palestinians. 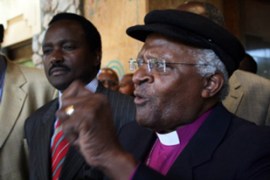 Tutu: ‘Use force to remove Mugabe’

South African archbishop says the African Union should give Zimbabwe an ultimatum.