A video of a male Israeli soldier bellydancing around a bound and blindfolded female prisoner has been received with disgust among Palestinians and in the Middle East.

The video provoked an angry response from the Palestinians on Tuesday.

The clip, which came to light after it was screened on Israel’s private Channel 10 television late on Monday, shows a soldier gyrating to rhythmic drumbeat of an Arabic track as the woman, who is wearing a headscarf, huddles against a wall, her hands bound in front of her and her eyes bound with a white cloth.

The soldier, who is wearing sunglasses and smiling broadly, repeatedly brushes up close to the woman who has a Hebrew speech bubble coming out of her mouth reading “Allahu Akbar” – Arabic for  “God is greatest”.

Crudely captioned “Israeli soldier catch Arab terrorist (he dance on her) funny”, the clip lasts just over a minute.

The video was immediately condemned by the Palestinian Authority (PA) as “deeply offensive to the dignity of women”.

“This is a disgusting illustration of the sick mentality of the occupier. This is not an isolated incident,” a statement from the office of Salam Fayyad, the Palestinian prime minister, said.

In its response, the Israeli military condemned the clip and said the military police had opened an investigation into what it described as an “isolated” incident.

“The IDF (Israel Defence Forces) denounces actions such as those depicted in the videos,” it said referring to an unspecified number of video clips.

“The videos are isolated cases that do not represent the IDF as a whole.”

The statement said that from now on, a military police investigation would become “standard practice in cases in which similar behaviour is alleged”.

Exposure of the video came just seven weeks after an Israeli soldier sparked widespread outrage by posting pictures of herself smiling and larking around next to blindfolded and handcuffed Palestinian prisoners.

The army denounced the pictures as “shameful” while the PA described them as humiliating, but the former soldier, Eden Abergil, claimed she could not understand why the images had caused such offence.

Rights groups said at the time that photographs were clear evidence of a culture within the military that treated Palestinians as objects rather than human beings – a sentiment which was echoed by Fayyad’s office on Tuesday.

“With the advent of easy-to-use media like YouTube, the truth is coming to light about a culture of humiliation of the Palestinians,” it said.

“The soldiers are fed by a wider Israeli policy that behaves (as if it were) above the law and human rights values.”

Israeli blogger Dimi Reider, who first exposed the Eden Abergil photographs in August, said the video flew in the face of Israel’s claims to have one of the most moral armies in the world.

“This video finally debunks one of the most persistent Israeli myths – that ours is the only occupying army in history that does not sexually abuse the women of the occupied nation,” he wrote in his blog, Dimi’s Notes.

“Second, it is about as stark proof as it gets that the IDF cannot and should not monitor itself (if it could, the soldiers would be in prison, de-ranked and de-mobbed before the video even hit the web).” 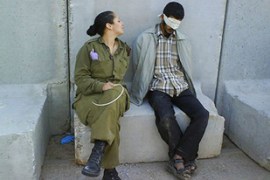 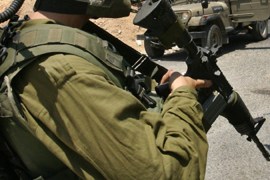 An Israeli court has convicted two soldiers for using a child as a human shield during the deadly 2009 Gaza war.