Rescue crews are working to clear roads and homes after a torrent of toxic red sludge swept over three Hungarian counties, killing four people and injuring 120.

Hungary declared a state of emergency after thick red sludge burst from a reservoir at Ajkai Timfoldgyar Zrt metals plant in Ajka, in the country’s southwest.

An estimated 700,000 cubic metres of the waste, a by-product of aluminium production, poured through Kolontar and two other villages, leading hundreds of people to be evacuated.

Many have suffered from burns and eye irritations caused by lead and other corrosive elements in the mud.

There are fears that the pollution has already found its way into the Marcal river, which is connected to the Danube River, one of Europe’s major waterways.

Sandor Toth, deputy chief of the water management company for western Hungary said the sludge could potentially reach the Danube within four or five days.

“From the point of view of water management, it’s a catastrophe,” he said.

The European Union said on Wednesday that it feared the disaster could spread to half a dozen European nations and was ready to offer help.

“This is a serious environmental problem,” Joe Hennon, an EU spokesman, told The Associated Press news agency. “We are concerned, not just for the environment in Hungary, but this could potentially cross borders.”

Emergency workers and construction crews are pouring plaster into a river near the spill in an attempt to neutralise the waste and prevent it entering major river systems.

Timea Petroczi, a spokeswoman for the disaster relief services, said that efforts to neutralise the pollution was “already getting good results showing that alkaline levels in the water are falling”.

Hungary’s national disasters unit defined the red mud on its website as: “A by-product of alumina production”.

“The thick, highly alkaline substance has a caustic effect on the skin. The sludge contains heavy metals, such as lead, and is slightly radioactive. Inhaling its dust can cause lung cancer.”

A Greenpeace expert said the impact from the mud spill could be much worse than a cyanide spill at Baia Mare in Romania 10 years ago, when cyanide-tainted water was discharged from a gold mine reservoir, polluting the Tisza and Danube rivers.

“This disaster is seven times as large as the incident in Baia Mare,” Katerina Ventusova, a Greenpeace expert for toxics, said.

“The ecological impact can be very wide and take a long time to neutralise because heavy metals and caustic soda form a very dangerous toxic mix.”

Anna Nagy, a government spokesperson, told Al Jazeera said an investigation was under way to “find the person criminally responsible”.

“It is obviously not a natural catastrophe – it was caused by human mistake,” she said.

The country’s state secretary said there was a suspicion that the company which owns the reservoir had stored more red sludge than was allowed, or that containers had not been properly fitted.

However, MAL Zrt has insisted it had done nothing wrong.

“According to the daily and annual checks, everything was working fine,” Zoltan Bakonyi, MAL chief, said.

MAL Zrt said on Wednesday that it wanted to restart production at the weekend. The government suspended production after Monday’s spill.

People in Kolontar, which lies closest to the burst reservoir, were trying to recover their belongings on Wednesday but police were not yet letting them return to their polluted homes.

“My bathtub is full of this sludge … when the dam burst, it made a terrible noise. I was in my yard, and I had to run up the steps to the porch but the water was rising faster than I could run,” Ferenc Steszli, 60, said.

Farmland around the village was covered in the sludge and many livestock was killed.

Nagy told Al Jazeera it is “forbidden and impossible” for local residents to return to their homes.

“Everything is covered in this poisonous toxic sludge. There is no radiation, fortunately, but it causes severe burning and casualties when touched. Surface waters are polluted but deep water, where drinking water is supplied from, is not, which is very lucky,” she said.

She said that there was a good chance of preventing the mud from entering big river systems such as the Danube.

MAL Zrt, the owner of the plant, said in a statement that there had been no sign of the impending disaster, and that the red sludge did not qualify as hazardous waste according to European Union standards.

Al Jazeera’s Anita McNaught, reporting from the disaster area, said that the damage from the spill is enormous.

“They [MAL Zrt] are claiming it is not hazardous waste, which is a bit of a semantic game they are playing at the moment.

MAL Zrt recommended people to clean off the sludge with water to neutralise the substance. 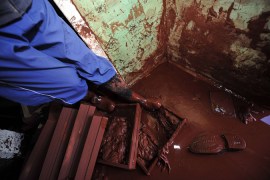