Israeli settlers are reported to have set fire to a mosque in a Palestinian town in the occupied West Bank, damaging prayer rugs and a large number of copies of the Quran, as well as spraying anti-Arab graffiti on the walls.

According to witnesses, five Jewish settlers broke into a mosque in Beit Fajjar in the early hours of Monday and set it alight before the morning prayers, Ahmad Thawabteh, the town’s mayor, told Al Jazeera.

“The Israeli police … have opened a very widespread investigation; the other security forces in Israel will be a part of [it], as well as Palestinian information that has some contribution to this investigation,” she told Al Jazeera.

“We see this incident in a very severe manner. We will do the utmost to find these lawbreakers and bring them to court.”

Al Jazeera’s Nour Odeh, reporting from the mosque, said emotions are quite high in the town.

“It was a little before three in the morning when residents saw smoke coming out of the mosque, that they rushed in to put out the fire,” she said.

“We heard residents [break] into chants about revenge. Much of the talk here is [calling this a] religious type of attack rather than a politically motivated one.”

Meanwhile, Al Jazeera’s Mike Hanna, reporting from Jerusalem, said: “Certainly this is something that is ratcheting up tensions at a time when the Israeli cabinet are meeting to decide on extending the settlement freeze.

“A mosque was burned in the West Bank earlier this year by settlers who say it was on their land – land that they claim and occupy.

“There is certainly a pattern here. There will be a settler demonstration north of the West Bank today which is also linked to a mosque that the settlers want destroyed.”

Vandals occasionally spray-paint the words “price tag” on buildings and cars, suggesting that the attacks are the “price” for any attempt by the Israeli government to curb the growth of illegal settlements.

Human-rights groups say the Israeli government does not take the attacks seriously enough.

The incident in Beit Fajjar comes as Israeli and Palestinian officials prepare to resume indirect negotiations.

Palestinian leaders are pushing for a complete freeze in new Israeli construction in both the West Bank and East Jerusalem.

Binyamin Netanyahu, the Israeli prime minister, approved last year a temporary halt in West Bank settlement growth – but it does not apply to East Jerusalem.

Many communities in the West Bank have ignored the order and continued new construction. 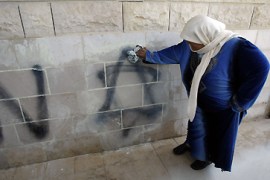 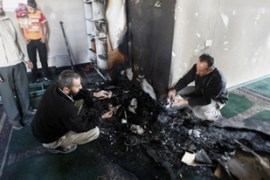