Hamid Karzai has strongly criticised the involvement of Russians in an anti-drugs operation in eastern Afghanistan, saying that it happened without permission and violated Afghan sovereignty.

A statement from the Afghan president’s office on Saturday said he had ordered the defence and interior ministries to investigate the operation and to report back to him by Saturday night.

The first joint US-Russian raid of such nature took place late on Thursday in Nangahar province.

Russian involvement in Afghanistan is still a sensitive issue since the end of the Soviet occupation of the country. Soviet troops fought Mujahideen fighters for 10 years before pulling out of the country in 1989.

Russian officials said on Friday that Russian and US agents, supported by helicopters and Afghan police, destroyed four drug laboratories and nearly one tonne of heroin in a raid this week.

Al Jazeera’s James Bays, reporting from Kabul, said the counter-narcotics raid, which was also announced by the US Drug Enforcement Administration, came as US and Nato are calling for Russia to play a more supportive role in their war against Taliban fighters in Afghanistan.

“There seems to be an effort where Nato is requesting Russian support in the ongoing conflict with the Taliban,” he said.

The Afghan interior ministry counter-narcotics police led the operation with DEA, Nato and Russian personnel playing a supporting role, the US embassy in Kabul said in a statement, referring requests for details to the Afghan government.

In the statement released by his office, Karzai said: “No organisation or institution has the right to carry out such military operations inside the territory of our country without permission and agreement from the Islamic Government of Afghanistan.

“Afghanistan condemns this act by Nato and announces that such unilateral operations are a clear violation of Afghan sovereignty as well as international law, and any repetition will be met by the required reaction from our side.”

A Russian official, however, said Karzai was “misinformed” in saying the operation went ahead without permission from Afghan  authorities.

The representative in Kabul of the Russian anti-drugs service, Alexey Milovanov, told the AFP news agency it was an Afghan operation.

“It was an operation conducted by the Afghan ministry of interior, not by us,” Milovanov said.

“We have simply acted as advisers, according to an agreement between our two countries permitting the presence of Russian advisers during a drug raid.”

He said that four Russian anti-drug officials were present at the operation.

Russian media quoted on Friday the head of Russia’s anti-drugs service, Viktor Ivanov, as saying that Afghan officials had been involved in the raid.

Ivanov travelled to Washington last week to discuss co-operation in fighting drug trafficking, and accused the US of  failing to destroy heroin laboratories and crack down on poppy-growing landowners.

Russia frequently criticises what it describes as the inadequate anti-drug policies of US and Nato forces in Afghanistan, which it says lead to an increased flow of drugs into Russia through Central Asia.

Russian drug control authorities have estimated that 30,000 Russians died in 2009 from using Afghan heroin, and that a million have died in the past decade.

Russia already assists in the training of counter-narcotics officials outside Moscow to combat the Afghan heroin trade.

Afghanistan produces about 90 percent of the world’s opium in an industry estimated to be worth almost $3bn a year,  which helps fund the Taliban-led campaign. 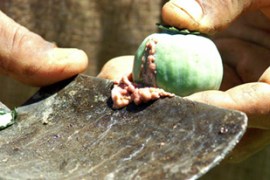