The body of Nestor Kirchner, the former president of Argentina, has been laid to rest in his home town in the south of the country.

Vast crowds lined the streets of Buenos Aires on Friday as the hearse bearing his coffin made its way to the airport before being flown to Kirchner’s native city of Rio Gallegos, in the province of Santa Cruz for an intimate funeral.

The only people allowed at the private ceremony were Cristina Kirchner, his widow and the current president; the couple’s two children Maximo and Florencia; close government officials; and Hugo Chavez, Venezuela’s president.

Nestor Kirchner’s sudden death due to a heart attack on Wednesday has prompted an outpouring of emotion over two days of mourning in Argentina.

Tens of thousands of people emerged from their apartments, government offices and businesses as Cristina Kirchner led the funeral cortege through the capital on Friday.

Mourners, many carrying the country’s blue and white-striped flag, filled the air with chants of “Nestor didn’t die, Nestor didn’t die! He lives in the hearts of our working people!”

Others cried, sang or threw flowers at the hearse.

At Jorge Newberry airport, an honour guard loaded the coffin into an Argentine air force plane before it headed for Rio Gallegos where it was greeted by another crowd of mourners.

Earlier, Cristina Kirchner and her children spent hours receiving the condolences of supporters of her husband. Thousands of Argentines had already filed past the coffin as it laid in state outside the presidential palace.

Kirchner, 60, was succeeded by his wife as president in 2007, and had been expected to run in the 2011 presidential election.

He is widely credited by supporters for helping to lift the country out of the slump which followed the country’s 2001 to 2002 financial crisis.

A member of the dominant Peronist party, Kirchner built strong alliances as president that won him solid backing while also steering the party to the left and courting regional leftists such as Chavez.

At the time of his death, he was secretary-general of the United South American Nations, or Unasur.

After leaving office, Kirchner remained a top powerbroker and adviser to Fernandez, and his unexpected passing shakes up the nation’s politics.

“Kirchner was the economic co-ordinator, the ideologue, and the ministers were executors of his policies. He had the steering wheel,” Juan O’Donnell, an analyst with the private consultancy Econviews, said.

Fernandez’s approval ratings are around 35 per cent, too low to suggest she could win a first-round victory in the 2011 vote.

Argentina, a leading agricultural exporter, has benefited from a boom in commodities prices since its economic debacle nine years ago that plunged millions of Argentines into poverty and prompted a massive default and sharp devaluation in its currency. 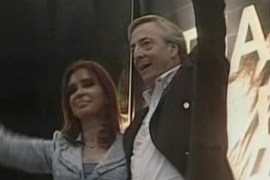 A look at the career of the former Argentine president who has died of a heart attack. 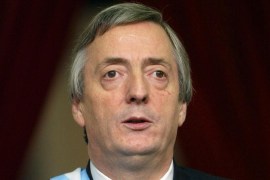 Nestor Kirchner, the former president of Argentina and husband of the incumbent Cristina Fernandez-Kirchner, has died. 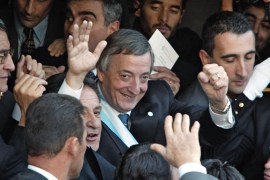 Argentina’s former president served from 2003 to 2007 and is credited with bringing the country out of economic turmoil. 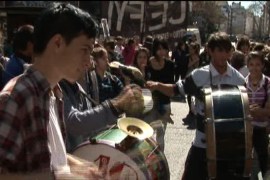 Students march against deteriorating quality of education in schools and universities.