The Nigerian rebel group that claimed responsibility for car bombings that killed at least 12 people during independence day celebrations has said that the attack was not the beginning of a new campaign of violence.

“It was a symbolic and opportunistic attack intended as a one-off high profile reminder that the injustice in the Niger Delta has not been addressed,” the Movement for the Emancipation of the Niger Delta (Mend) said in an email sent to the Reuters news agency on Saturday.

The statement came as South African police questioned Henry Okah, the group’s alleged leader, over the blasts, which took place as people gathered to celebrate the 50th anniversary of the end of colonial rule.

“He was detained and will be in the custody of the police for 48 hours as a routine,” Mend said. “He was invited today after the blast.”

The group said “he was invited for questioning after pressures from the Nigerian government”.

Okah, who has denied being Mend’s leader, was arrested in Angola three years ago and transferred to Nigerian custody, but he moved to Johannesburg in July 2009 after being released as part of an amnesty programme offered to fighters in the Niger delta.

Al Jazeera’s Yvonne Ndege, reporting from Nigeria’s capital Abuja, said it was unclear Okah could face charges in South Africa and what those charges could be.

“We know that he is being interrogated by security agents in South Africa, and that this comes as no surprise … on Thursday, Henry’s Okah’s house in South Africa was raided by operatives from Interpol,” Ndege said.

“And the allegation then was that he was plotting to bomb Abuja on Independence Day. Of course, this actually happened on Friday.”

Nigeria’s State Security Service admitted on Saturday that it had received a warning that there was an attack planned during the independence day celebrations.

“We are happy all the same that the event went on smoothly and it wasn’t interrupted.”

The secret service said had stepped up security after the warnings, including towing 65 vehicles from the streets and cordoning off roads leading to the parade ground.

Mend issued a warning to journalists about an hour before the attacks, telling people to stay away from festivities at Eagle Square in Abuja. It criticised the government for doing nothing to end the poverty in the delta despite the billions of dollars it receives in oil revenue.

The group has said it gave security services five days notice of the plan to attack the celebrations.

Goodluck Jonathan, Nigeria’s president, who himself in from the oil-rich region in the south, acknowledged that “security lapses” had allowed the bombing to happen, but did not saw whether he had any plans to overhaul the security agencies.

Nigeria’s This Day newspaper, citing presidency sources, reported that UK intelligence services had also uncovered information about a possible plot and passed on a warning to Abuja. The Duke of Gloucester, who was due to represent Queen Elizabeth at the event, pulled out.

Mend has been fighting for years for a greater share of oil revenues for the delta, home to Africa’s biggest oil and gas industry, but signed an amnesty with the government last year. 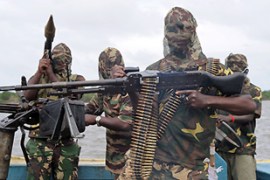 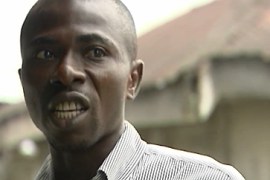 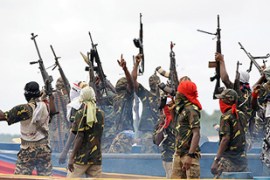