The Mount Merapi volcano has started rumbling and spewing clouds of ash and lava again, after killing more than 30 people earlier this week.

There were no reports of new injuries or damage, but officials on Friday evacuated hundreds more villagers living around the slopes and extended the danger zone from eight to 10 kilometres.

Clouds of hot gas reached as high as one kilometre above the mountain’s 2,968 metre peak, and thick dust spread to villages nearby.

Government volcanologists said the activity was not a fresh eruption and could help to stabilise Mount Merapi following Tuesday’s series of deadly eruptions.

“It shot heat clouds at 6:10am as far as 3.5km down its southeastern slopes and followed this with ash rain,” Heru Suparwoko, a volcanologist, told the AFP news agency.

“It’s definitely dangerous for anyone who might be in the path of the heat clouds.”

The activity appeared to be easing pressure behind a lava dome that has formed in the crater, Safari Dwiyono, a scientist who has been monitoring Merapi for 15 years, said.

“If the energy continues to release little by little like this, it reduces the chances of having a bigger, powerful eruption,” he said.

More than 40,000 people are living in temporary shelters near the city of Yogyakarta after being ordered to evacuate a 10-kilometre danger zone on Monday.

Officials have later brought cows, buffalo and goats down the mountain so that villagers would not try to go home to check on their livestock.

Al Jazeera’s Step Vaessen, reporting from the capital, Jakarta, said authorities were having some difficulties trying to convince people to stay in the camps.

“There was a bit of a strange incident this morning, with the police chief himself going up the mountain as the eruption was taking place,” she said.

“There were pictures on local television showing him forcing himself up to the top. He wanted to see if there were still people up there, because farmers are still going back to the villages despite the highest alert level.”

Officials said ash from the volcano was threatening a 9th-century temple complex that is one of the country’s most popular tourist attractions.

The famed Borobudur temples, which draw millions of visitors every year, have been closed to the public so workers can clean off a blanket of white ash from Tuesday’s eruptions.

Marsis Sutopo, head of the temple conservation office, said there were concerns the acidic soot will speed the decay of the stones. 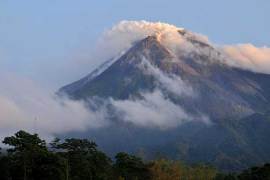 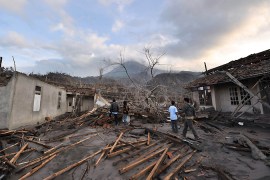 Funerals for the 33 dead begin as rescuers search for any survivors of Mount Merapi eruption.