There are increasing fears that a cholera outbreak in Haiti, which has already killed more than 300 people, could take hold in the capital, Port-au-Prince.

Al Jazeera’s Seb Walker, reporting from the city, said neighbourhoods such as Cite Soleil, with “appalling sanitation levels”, had been a concern ever since the first cholera cases were reported last week.

“Officials say they still haven’t found confirmed cases of cholera in the metropolitan area, but some doctors say that may not be the case,” he said.

Doctors at a clinic in Arcahaie, a town 30km from Port-au-Prince, said they had treated more than 700 cases in recent days.

“We have isolated the strain that’s been causing these cases and it’s been confirmed as cholera,” Iliuska Sanchez Rodriguez, a Cuban doctor, said.

UN officials say they suspect the disease could have reached Arcahaie, but they refuse to confirm any cases in the entire region, let alone in Port-au-Prince.

“We have been monitoring very closely the spread of this disease and it has been seen to get closer and closer to the capital,” our correspondent said.

Health officials have been concerned that the disease, which causes diarrhoea, vomiting and severe dehydration, could reach Port-au-Prince where hundreds of thousands of people are living in makeshift camps following an earthquake in January.

A medic at a clinic in Cite Soleil told Al Jazeera that she had treated a young girl who had been admitted to a neighbourhood clinic with an acute case of diarrhoea.

“This is a patient that had never travelled out of Cite Soleil. She was local to the community and had not left, which is very concerning really because a lot of cases throughout the country are actually people who’ve been travelling,” Kara Gibson, a doctor at the Samaritan’s Purse Clinic, said.

Health officials warned that the capital should prepare for a possible outbreak and people have been urged to maintain a strict hygiene regime and seek treatment at the first sign of symptoms.

“If cholera spreads in the city, it’s going to be extremely difficult to deal with and many people could die, this is what we are hearing from health officials all the time,” Al Jazeera’s Walker said.

Clinics were operating beyond capacity around the Artibonite river, which is carrying the deadly cholera bacteria across the country to the Caribbean coast at Saint Marc, the outbreak’s epicentre, about 100km north of Port-au-Prince.

The source of the outbreak has not been confirmed, but there have been accusations that excrement from a newly arrived unit of UN peacekeepers from Nepal caused the epidemic.

Vincenzo Pugliese, a mission spokesman, said officials had collected samples from the base on Friday which tested negative for cholera and the mission’s military force commander ordered the additional tests to confirm. He said no members of the Nepalese battalion have the disease.

Claire-Lise Chaignat, the head of the World Health Organisation’s cholera task force, said any speculation about the source of the outbreak was “premature”.

“We don’t know where the germ is coming from,” she told Al Jazeera.

“The speculation about the UN troops from Nepal having brought the disease to Haiti seems very unlikely.

“The way for the troops to be transported from Nepal to Haiti is long enough that the disease would have declared itself before they reached Haiti.

“We also know that troops and armies normally live in good sanitary conditions and are not exposed to conditions which are conducive to getting cholera.”

But local politicians, including a powerful senator and the mayor of Mirebalais, are pointing the finger at the Nepalese peacekeeping base, which is perched above a source of the Meille river, a tributary to the Artibonite river on Haiti’s central plateau. 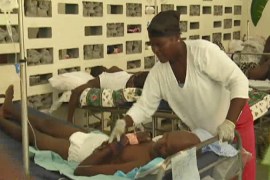 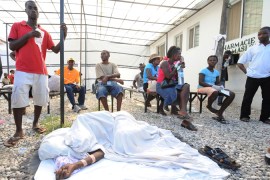 Outbreak that already killed more than 200 people in the countryside has now made it to the capital Port-au-Prince.