China and Japan’s foreign ministers have agreed to improve ties and resume talks on a disputed gas field, as the two sides try to calm their worst diplomatic row in years, China’s official Xinhua news agency has reported.

“We agreed that we will make efforts to improve the ties between Japan and China and press forward the strategic, mutually beneficial relationship,” Seiji Maehara, Japan’s foreign minister, said on Friday after talks with Yang Jiechi, his Chinese counterpart, on the sidelines of a regional summit in Vietnam.

“We also agreed that we will resume the negotiations on the gas field development in the East China Sea,” he said.

Following the announcement, Japanese broadcaster NHK reported that the prime ministers of China and Japan had agreed to meet on Friday. Both leaders are attending the summit of Asean and six other nations in Vietnam.

“The Japanese and Chinese governments have agreed to hold a summit between Prime Minister Naoto Kan and Chinese Premier Wen Jiabao … according to government sources,” NHK said.

Relations between the world’s second- and third-biggest economies took a turn for the worst seven weeks ago when a Chinese fishing boat collided with two Japanese coastguard vessels near a disputed island chain.

Japanese authorities arrested the captain of the fishing trawler, sparking outrage in Beijing. The captain was subsequently released, but not before serious damage was done to the relationship.

Beijing cancelled a series of planned diplomatic meetings, insisting the arrest was illegal and invalid.

The row sparked sometimes angry nationalist protests in both countries, with hundreds of Chinese taking to the streets of the southwestern city of Chongqing this week to vent their anger, burning the Japanese flag.

Relations took another hit last month when a dispute flared over oil and resource-rich islands that China calls the Diaoyu and Japan the Senkaku islands, in the East China Sea, that both countries claim as sovereign territory.

Chinese restrictions on the export of rare earth minerals, vital for the manufacture of high-tech goods, and over which China has a near-monopoly on global production, have alarmed Japan and others.

China has denied cutting shipments of rare earths to Japan for political reasons, and says it restricts overall production and exports of the minerals to avoid depleting its reserves and causing harm to the environment.

Wen and Kan met briefly in Brussels during an Asia-Europe meeting on October 4 for their first talks since the incident, but both sides have ramped up the rhetoric since then.

The rift between China and Japan is one of several disputes casting a shadow on efforts to boost economic co-operation among countries in a region increasingly seen as the world’s engine of growth.

The Asean leaders have been pressing to fast-track an ambitious plan to establish a political and economic community by 2015, and some have pushed at the meetings in Hanoi this week for greater co-ordination in the face of strengthening currencies. 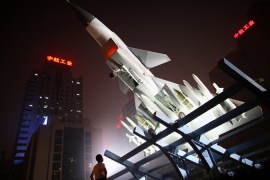 Territorial disputes between China and Japan leave some countries nervous, as Asian leaders meet in Vietnam. 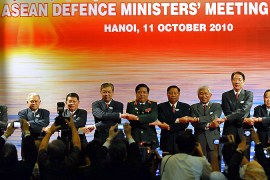 Defence chiefs meet on the sidelines of a regional summit, as the two sides seek to mend strained diplomatic relations. 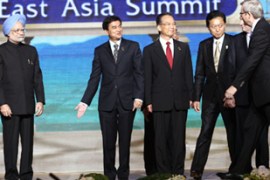 Groundwork for East Asian Community project laid at summit amid concerns over US role.