Indonesian rescue workers are struggling to reach hundreds of people believed to be missing after a tsunami smashed into a remote island chain in the west of the country, killing at least 300 people.

The waves washed away at least 10 villages and flattened houses, as it surged as far as 600 metres inland on South Pagai island, officials said.

Medical personnel were on their way to the worst-hit areas in helicopters but rescue efforts had been hampered by disruption to communications on the islands, which are about half a day’s boat ride away from the port of Padang on Sumatra. Rough seas and bad weather also hampered relief operations.

“We need to find the missing people as soon as possible,” Harmensyah, the West Sumatra disaster management head, said.

“Some of them might have run away to the mountains, but many would have been swept away.”

Al Jazeera’s Wayne Hay, reporting from Padang on his way to the Mentawai Islands, said the communications disruption had also made it difficult to get an accurate gauge of what has happened.

“[Officials] are saying some supplies have been able to reach the island through boats, which are really the only way of getting there at this stage,” he said.

“But the message coming back to the West Sumatra government is that a lot more is needed.”

He also said that it is proving difficult to obtain an accurate death toll from the tsunami, as local media outlets are reporting at least 300 dead.

Andrew Judge, the chief executive officer of Surfaid International, which helps local communities in Sumatra, told Al Jazeera that reports of deaths and damage were escalating.

“We are working closely with the Indonesian government and our contacts in the surf industry to find out the scope and what needs to be delivered.

“Our worries are not only with the deaths and missing, but also the evacuation site, health and hygiene, and nutrition.

“If people are suffering from malaria or are malnourished, particularly the very young or very old, and they are moved away from their homes, we are worried about disease outbreaks and further deaths in the weeks to come.”

But in some good news on the island, a group of tourists forced to abandon ship when their charter boats were thrown together by the tsunami arrived safely back in the Sumatran city of Padang.

Eight Australian survivors, and American and a New Zealander recounted their harrowing encounter with the tsunami after setting foot in Padang on Wednesday.

“They hit us directly in the side of the boat, piercing a fuel tank,” Daniel North, the American crew member, said.

“Almost immediately, the captain gave the order to abandon ship and everyone got off the boat.”

The group clung to surfboards and anything that floated as they washed in the wetlands and then climbed the highest trees they could find to wait for more than 90 minutes until they felt safe.

Meanwhile, another group of nine Australian surfers were found alive and well after going missing following the tsunami, officials said.

The Indonesian archipelago straddles a region where the meeting of several continental plates causes high volcanic and seismic activity. The area is shaken by thousands of earthquakes every year.

The Asian tsunami in December 2004 – triggered by a 9.3-magnitude quake off northwest Sumatra – killed at least 168,000 people in Indonesia alone. 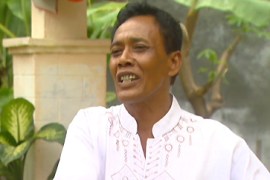 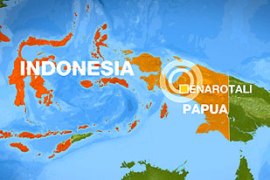 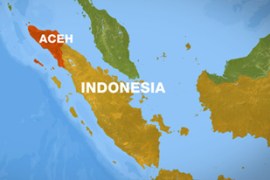 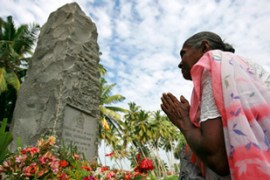 Memorial services held for the more than 200,000 victims of 2004 natural disaster.