At least 65 people have been killed after a roof collapsed at a wedding in northern Afghanistan.

The incident occurred in Jelga, a remote district located in the northern province of Baghlan, on Wednesday as guests gathered for the wedding in the early afternoon.

Hamid Niazi, the head of the Afghan Red Crescent, said at least 40 people were injured and that many of the victims were women and children.

An investigation into the cause of the collapse is under way.

Munshi Abdul Majid, the governor of Baghlan, said the wedding party was being held in a three-storey village house.

“Women and children form the bulk of fatalities,” he said.

Houses in Afghanistan are often flimsy structures of mud and wood, constructed with little or no oversight by civil authorities.

Weddings are one of the principle forms of entertainment and social interaction in Afghanistan, although men and women often celebrate in separate areas.

In June, at least 50 people were killed when a suicide bomber attacked a wedding party.

Those festivities had been attended by members of an anti-Taliban movement in Kandahar, the Taliban’s main stronghold in the south. 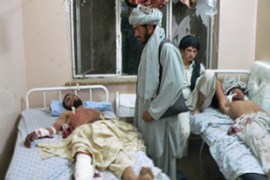