An explosion on April 20 aboard the Deepwater Horizon, a drilling rig working on a well for the oil company BP 1.6km below the surface of the Gulf of Mexico, led to the largest oil spill in history.

After a series of failed efforts to plug the leak, BP said on July 15 that it had capped what it had named the Macondo well, marking the first time in 86 days that oil was not gushing into the gulf.

Nearly five million barrels of oil had gushed from BP’s well, according to official estimates. Despite the capping, the impact of the spill continues.

An investigation by an Al Jazeera online correspondent has found a growing number of toxic illnesses linked to BP oil dispersants along the Gulf coast. 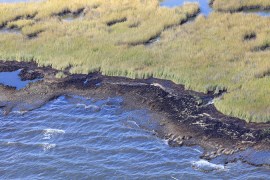