Guinea has announced an indefinite delay to a presidential election run-off just two days before it was to be held, casting doubt on the West African state’s hopes for civilian rule and provoking fresh protests.

“The October 24 date is not possible,” General Siaka Sangare, the election commission head, said on Friday.

He said a new date would be announced after the commission further assesses preparations for the poll.

Earlier this week, General Sekouba Konate, the country’s military leader, named Sangare, a Malian citizen, to head the electoral commission after disagreements over the commission’s makeup threatened to delay the run-off, scheduled for Sunday.

Cellou Dallein Diallo, a presidential candidate and a former prime minister, had accused the previous commission chief of preferring his rival, Alpha Conde.

Sangare signaled a possible delay to the run-off on Thursday when he said voting conditions were “deplorable”.

Since then, officials learned that 17 computers that were to tabulate poll results were missing.

“This election was bound to be delayed because of the many technical problems that still need to be resolved,” Mohamed Jalloh, an analyst at International Crisis Group, said.

“But there are risks to a delay as well.”

Analysts said the new delay was likely to be accepted by both candidates and give the electoral commission time to fix problems found during June’s first round of voting, but it could also raise the chance of ethnic clashes or a new military-led coup.

The vote, meant to transfer power from the army to an elected government, has been postponed repeatedly amid street violence and rows over the electoral commission leadership.

Security forces used teargas to quell protests that erupted in a neighbourhood of the capital, Conakry, after the announcement, according to a Reuters witness, extending weeks of demonstrations that have occasionally turned violent.

The United Nations and United States have urged Guinea to set a new date for the run-off as soon as possible.

P.J. Crowley, the US state department spokesman, said Washington was “hopeful that the people of Guinea will avoid significant violence. And we also will hope that the government will reschedule these as soon as possible”.

During protests earlier this week, security forces fired at unarmed protesters, shooting some at point-blank range, the Geneva-based UN human rights office said in a statement.

One man was killed and at least 62 were wounded during demonstrations in Conakry during the week. The UN said authorities severely beat protesters and arbitrarily detained an unknown number of people and kept them in undisclosed locations.

The statement said some of those responsible for the violence appear to be members of a special police unit charged with safeguarding the election.

The first round of voting on June 27 passed in relative calm despite fears of violence in the mineral-rich country. The process has stumbled since then, amid political infighting, logistical challenges, and street clashes between supporters of the rival candidates.

The vote aims to return the country to civilian rule after 25 years of military rule. 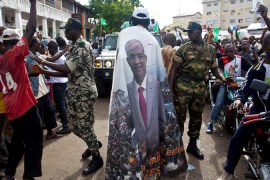 Clashes ahead of Guinea run-off 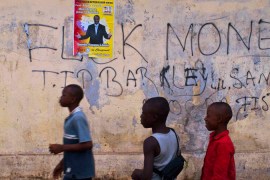 Second round of voting for president, in what should be the first democratic election since 1958, set for October 24. 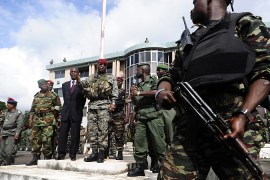 Delay of at least two weeks casts doubt over whether it can complete its transition from military to civilian rule. 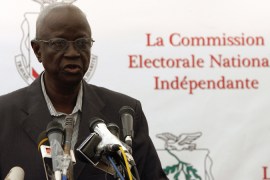