At least one person has been killed and thousands affected after a powerful cyclone made landfall on the western coast of Myanmar, officials say.

The official told AFP news agency that one fatality had so far been reported.

“A woman in Minpyar town was killed when a tree collapsed during the cyclone and we have not heard of anything apart from this case,” he said.

The coastal town of Kyaukphyu was the worst-hit, with the power cut off and the sea wall partly destroyed.

A Red Cross worker in the former capital Yangon estimated that about 70 per cent of Kyaukphyu town was destroyed, with about 60,000 people in the district needing assistance, although the organisation had not heard of any deaths.

“Fishermen and people there have had time to move to safer places as disaster measures were already in place,” he said.

Our office in Kyaukphyu was destroyed by a falling tree… we have had problems getting transport and the latest data but are trying to reach the affected areas as soon as possible.”

A resident in Sittwe said strongwinds tore through the area on Saturday evening, destroying houses on the outskirts of the town but leaving larger buildings standing.

“The authorities warned us with loudspeakers yesterday to prepare for the cyclone, so people had time to move safer places,” he said.

The Meteorology office on Friday predicted sea levels could swell by as much as 3.7 metre, but the Sittwe resident told AFP news agency there had been no tidal wave in his area.

After hitting the coast, the storm headed northeast through the central part of the country and is forecast to “abate into a moderate storm”, the New Light of Myanmar newspaper said, quoting
the Department of Meteorology and Hydrology.

Myanmar is frequently hit by tropical storms and in 2008 was battered by Cyclone Nargis, which left 138,000 people dead or missing, mostly in the southwest delta region.

Nargis unleashed winds of 240kph and storm surges up to four metres high, sweeping away thousands of homes, flooding rice fields with salt water and ravaging schools and hospitals.

Myanmar’s military government faced international criticism for its response to the disaster.

It was accused of blocking emergency aid and initially refusing to grant access to humanitarian workers and supplies. 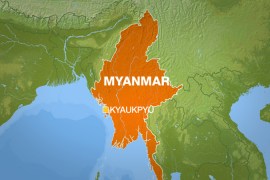 Reports of widespread damage as storm spins into the west of the country from the Bay of Bengal. 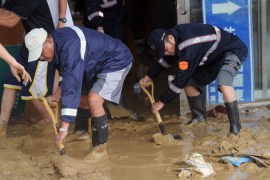 Storm spins into country from the Bay of Bengal, as typhoon leaves at least seven dead in Taiwan.