Nasa has revealed that there are oases of water-rich soil that could possibly sustain astronauts living in an outpost on the Moon.

Scientists from the US space agency found 155 litres of water after analysing a plume of debris that was created when they deliberately crashed a rocket into the lunar surface last year.

Reports published in Science magazine on Friday show that a large amount of water in the form of ice, as well as carbon monoxide, ammonia and silvery metals, were found near the south pole of the Moon following the crash on October 9, 2009.

The estimate represents only what scientists can see from the debris plume and it is almost twice as much as researchers had initially measured.

Morris Jones, a space analyst based in Australia, told Al Jazeera that the amount of water found is more than scientists ever expected.

“It’s beyond our wildest expectations,” he said.

“There is so much water that we feel pretty confident that we can go there, live there, build bases there and help the Moon become a permanent outpost for humanity.”

Proof that the Moon is not a dry, desolate world offers hope for a possible future astronaut outpost where water on site could be used for drinking or making rocket fuel.

“This place looks like it’s a treasure chest of elements, of compounds that have been released all over the Moon and they’ve been put in this bucket in the permanent shadows,” Peter Schultz, a planetary geologist at Brown University, said in a statement.

Mission chief scientist Anthony Colaprete, of the Nasa Ames Research Center, calculates there could be one billion gallons of water in the Cabeus crater, the area that the spacecraft hit, enough to fill 1,500 Olympic-sized swimming pools.

“The resources are there and potentially useable for future missions,” he said, adding there could be more such craters at both the Moon’s poles.

However, Mission scientist Kurt Retherford of the Southwest Research Institute in Texas, thinks the discovery of mercury could pose a challenge for any human settlers because of its toxicity.

But Colaprete said there were ways around the mercury dilemma.

“Just like we use filters on Earth to make sure our drinking water is clean, we will do the same on the moon. We can distill or purify it,” he said.

How the compounds became trapped in the crater, among the coldest places in the solar system, is unclear.

One theory is that they came from comets and asteroids, which pounded the lunar surface billions of years ago, and later drifted to the poles.

Apollo astronauts previously found traces of silver and gold in lunar samples facing the Earth. Specks of silver in the frigid polar crater are “not going to start the next ‘silver rush’ to the moon,” Schultz said.

But the scientists’ excitement is tempered by the political reality that there’s no plan by the United States to land on the moon anytime soon.

LCROSS, the mission that sent the rocket to crash into the moon, was originally hatched as a robotic mission before a future human trip. That was before Congress approved a blueprint last month for Nasa that shifts the focus from a manned moon landing, as outlined under George Bush, the former president, in favour of sending astronauts to near-Earth asteroids and eventually Mars.

A return to the Moon could potentially be a way-station, something still to be decided, but the Moon will not be an overall goal. 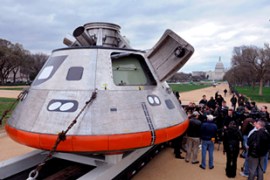 First man on Moon says the decision to scrap plans for a new mission is “devastating”. 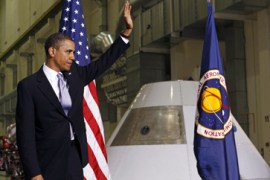 President tells Nasa that US will send astronauts into Mars orbit by the mid-2030s. 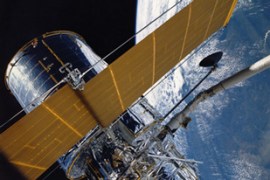 The telescope has changed astronomers’ understanding of how the universe formed. 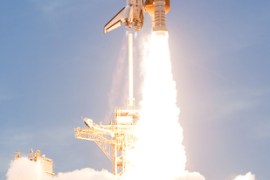 Atlantis heads for space station as Nasa begins to wind down shuttle missions.