Italy’s government has held emergency talks after riots broke out in a Naples suburb over plans to build a huge rubbish dump in a national park on the slopes of Mount Vesuvius.

Silvio Berlusconi, Italy’s prime minister, promised compensation of $20m for Terzigno, a Naples municipality, where the new tip is to be built, the AFP news agency reported.

But local officials rejected the offer, saying they were only interested in stopping the site, which is expected to be Europe’s largest rubbish dump, from going ahead.

“We’re not interested in money … we have only one objective: to prevent the opening of Cava Vitiello,” Guido Bertolaso, the mayor of Terzigno said on Friday.

Days of anger over the tip, said to be escalated on Thursday when protesters blocked garbage lorries being escorted by police on the way to Terzigno, a Naples municipality, setting several on fire.

Clashes erupted between demonstrators and police, leaving 20 officers injured and 16 vehicles damaged, officials said. They gave no word on the number of locals injured.

Waste disposal problems in Naples have been a source of contention for years, and are said to be the result of corruption, poor management and infiltration by the local mafia.

Piles of malodorous garbage have been accumulating in the city of Naples itself, raising fears of a repeat of the impasse in 2007 and 2008 that saw tens of thousands of tonnes of untreated waste accumulate around the city.

Silvio Berlusconi, the prime minister, promised to rid the area of the problem during his election campaign in 2008.

But Angelo Bonelli, the leader of Italy’s Green party, who was in Terzigno to meet residents, said the crisis was caused by “Berlusconi’s lies” and called for the prime minister to resign.

“Italians have been deceived by the Berlusconi government that not only lied about resolving the garbage crisis but still doesn’t have a plan to resolve the problem,” he said.

The European Court of Justice earlier this year warned Italy that its lack of a waste disposal system in the area was a risk to human health and the environment.

Ugo Leone, the director of the national park earmarked for the dump told the AFP news agency it was “an abuse by the state” and against the law.

“From the beginning we have opposed this by all legal means possible,” he said.

Non-violent campaigners include the “Vesuvian Mothers” group, a band of local mothers who have spent the last few weeks demonstrating daily with their children.

They say life in the vicinity of a tip is unbearable, with residents forced to keep their windows always closed to keep the stench at bay.

The site is said to be some eight kilometres from Pompeii, a Unesco World Heritage site that holds an excavated ancient Roman town that was buried under a major volcanic eruption.

The Cava Vitiello tip is also planned to be the biggest garbage dump in Europe with a three-million-tonne capacity and will take waste mainly from Naples.

Naples and surrounding areas have suffered garbage crises for years.

After a flare-up in late 2007 and 2008, the Berlusconi government reopened some old dumps, started shipping some garbage to Germany, and also ordered the construction of new dumps and incinerators as part of efforts to ease the problem.

But critics of the government said the latest crisis shows Berlusconi has failed to find a long-term solution. 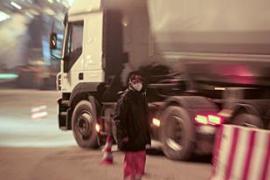 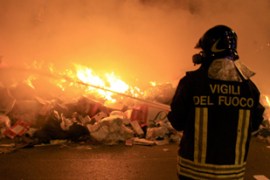 The European Union takes Italy to court for failing to end refuse crisis in Naples.