The European Court of Human Rights has fined Russia for banning parades organised by the country’s gay community.

Nikolai Alexeyev, a gay rights activist, had lodged three cases with the court arguing that the government had violated the European Convention on Human Rights, to which Russia subscribes as a member state of the Council of Europe.

The Strasbourg-based court ruled on Thursday that Moscow had violated rights of assembly and had discriminated on grounds of sexual orientation.

It also ordered Russia to pay $41,090 to Alexeyev in damages and for legal fees.

“This is a crippling blow to Russian homophobia on all accounts,” Alexeyev said in a statement after the verdict was announced.

The court also said the gay community’s claims were not given a fair hearing in Russia, whose constitution guarantees the right to hold demonstrations.

Alexeyev has said men connected to the authorities abducted him and pressured him to drop the cases.

The Russian authorities have for years denied homosexuals permission to hold demonstrations on the grounds that they would cause a violent reaction in the country, where prejudice against gay people runs deep.

“The mere risk of a demonstration creating a disturbance was not sufficient to justify its ban,” the court said in a statement.

Demonstrators have sometimes been beaten by police during rallies.

Alexeyev told Al Jazeera that the ruling is not only a victory for the gay community, but a victory for all who want to exercise their freedom of assembly in Russia.

“Russia will also have to change its legislation in terms of guaranteeing protection for those who wish to demonstrate freely,” he said.

Dmitry Medvedev, the Russian president, has promised repeatedly to usher in democratic ideals and policies, but rights activists and analysts say little has changed since he came to office two years ago.

Analysts are still awaiting signals over whether Sergei Sobyanin, the new Moscow mayor who was approved for the post on Thursday, will take a softer line on gay rights. 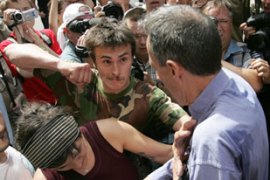