A senior Canadian air force commander has been sentenced to life in prison for the murders of two women, the sexual assault of two others and dozens of burglaries.

Colonel Russell Williams was the commander of Canada’s largest Air Force base until he was charged earlier this year.

A Canadian judge imposed two life jail sentences without possibility of parole for 25 years on Thursday, branding Williams a “sick and dangerous man”.

Williams, who once flew Queen Elizabeth’s plane, had pleaded guilty to killing two women in separate attacks, two sexual assaults and 82 burglaries in a court in Ontario.

Police said it was likely he would serve his sentence in solitary confinement.

“I stand before you indescribably ashamed… I deeply regret what I have done and the harm I know I have caused to many. I committed despicable crimes,” he told the judge tearfully before being sentenced.

A prosecution lawyer described the 47-year-old as “one of the worst offenders in Canadian history”.

Williams had videotaped himself raping the women, capturing their pleas for mercy, and then filmed them as they died.

The videos, which were not shown in court, will be destroyed when Williams dies.

The court heard that Williams started off by breaking into homes in eastern Ontario and stealing underwear. He sometimes took photos of himself wearing bras and panties.

Last November he entered the house of Marie-France Comeau, 38, and sexually assaulted her for hours before putting duct tape over her mouth and nose. Comeau, a corporal at the Trenton air base where Williams was commander, suffocated to death.

In January this year he abducted 27-year-old Jessica Lloyd, drove her to his house and then repeatedly raped her. He strangled her to death with a rope and later dumped the body by a rural road.

Williams was arrested in February after a police roadside check discovered the distinctive tire marks outside Lloyd’s house had been made by his SUV.

“As long as he dies in jail, I’m happy,” Lloyd’s brother Andy told reporters outside the court.

Williams has been in the military for 23 years. He had never been in combat but has been stationed across Canada and abroad, including a stint in 2006 as the commanding officer for Camp Mirage, a multi-national air force base near Dubai. 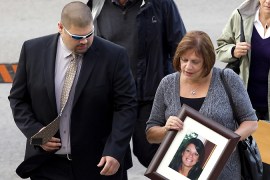 Officer in charge of largest air force base pleads guilty to two murders, two sex attacks and scores of burglaries.