A day after the government announced its comprehensive spending review, the country’s media have portrayed a nation reeling in shock.

Headlines on Thursday denounced measures that some papers say will hit the poorest hardest or cost families thousands of pounds, while still not doing enough to save the economy.

And yet on the streets there is relative calm.

A protest march by about 800 students in London on Wednesday barely made the news, and so far, despite strong criticism from unions, no strikes or further rallies have been announced.

This rather muted response comes as French protesters threaten to bring their country to its knees, causing fuel shortages and disrupting transport across the nation, in an attempt to pressure the government to scrap plans that would see the age of retirement raised.

Other European capitals have experienced similar discord on the streets as their governments introduced harsh austerity measures to curb national deficit.

Athens spent months plagued by violent riots and ongoing strikes that threatened Greece’s lucrative tourist industry after the government agreed to enforce major spending cuts in line with demands from the IMF and European Union.

Spain also saw large protests as the government brought in an unpopular series of economic reforms following a recession that pushed the rate of unemployment beyond 20 per cent.

While opinion polls suggest that many Britons are uneasy about the measures, which will impact on public services and social housing, as well as cutting hundreds of thousands of public sector jobs, there is a distinct lack of movement against the government.

Seumas Milne, a columnist for Britain’s Guardian newspaper, says one of the reasons for the seemingly muted reaction by the public is the fact that the cuts have not yet come into force.

“For most people it’s still quite a theoretical thing,” he told Al Jazeera.

Another factor is that many of those who will be affected are less able to be mobilised en masse to express their opinions, said Milne.

“The government has been quite clever in who it’s targeted in these cuts – many involve people on welfare who don’t have jobs and aren’t in unions,” he said.

The fact that the previous Labour government also admitted cuts were necessary in the last election is partly responsible for the lack of political drive against the cuts, he added.

“All the main political parties were signed up to the idea that the only way to solve the crisis was by bringing in cuts.

“So in politics there hasn’t been a strong place for the argument against the measures.”

The current Conservative-Liberal Democrat coalition government has also used its position as a fresh administration to blame the prior Labour leaders for the country’s economic woes.

George Osborne, the British finance minister, repeatedly referred to the legacy left by the prior administration as he delivered the spending cuts on Wednesday, saying that Britain must pay “the bills from a decade of debt”.

“I think the Tories [Conservative party] have been quite successful in hammering home that falsehood [that Labour are to blame],” Milne said, citing a recent YouGov poll for The Sun newspaper that showed some 48 per cent of participants apportioned blame towards the previous Labour government, while 18 per cent pointed the finger at the coalition.

‘Not in the British DNA’

Dr Christopher Pinney, a social anthropologist at the University of London, says another reason people are not taking to the streets is because the media are feeding the public the line that protesting is “not in the British DNA”.

“In the case of the Greeks and French, revolt and protest on the street has always been celebrated as part of a national tradition.

“That protest on the street … is also definitely part of the British political tradition, but it’s not perceived as such, because the media tries to erase it.”

Britain has a history of political action – in February 2003 about one million people marched through London to oppose the impending Iraq war, while the poll tax riots in 1990 are considered by some to have led to the eventual downfall of Margaret Thatcher, the-then prime minister.

However, restrictions imposed on unions means it is harder for them to strike and demonstrate, while according to Pinney, students in Britain – who are often at the heart of protests in Europe – are bound by debt, and have a limited sense of freedom.

Pinney also points to the British class system for the country’s lack of anti-government action so far. This, he says, is being used by the government and the press to “divide and rule”.

“One paper says it’s the poor bearing the brunt of the cuts, but then another is bleating on about the squeeze to the middle,” says Pinney.

“There’s been a systematic vilification of the poor – the victims of these cuts have been magically transformed into the people that caused the problem, and the poor remain largely silent and invisible.

“There is an element of witch burning about it. It becomes acceptable to remove £18bn from these people.

“My sense is that plays differently in France and Greece.”

Nabila Ramdani, a Paris-born freelance journalist based in London, agrees that cultural differences are at the heart of why French protesters are out on the streets while the British are not.

“There’s a tradition in France of taking to the streets. A tradition of anarchy in France that there isn’t in Britain,” said Ramdani.

She said that tradition harks back to spirit of the French revolution.

“It’s to do with getting rid of privileges and making sure that French people en masse have the same things.”

But Ramdani says the French protests are not just about pressuring the government to reverse austerity measures.

“That movement is not just to better their lives … it’s also to do with preserving a very French way of life that stands out in a wider European context,” she said.

“France is not a massively capitalist society and it’s fighting against an increasingly Anglo-Saxon model.”

Ramdani added that in France there is a greater sense of collectiveness, whereas Britain is a more individualistic society.

But a lack of protests now does not mean that Britain will not see them in the future.

Once the cuts start to bite, the unions, and wider society, will be more likely to take up the seemingly forgotten British tradition of protest. 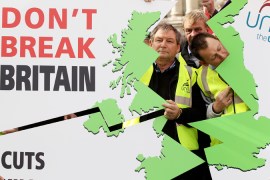 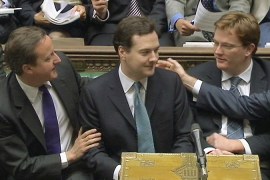