A Saudi prince has been convicted of murdering one of his servants in a frenzied attack in a British hotel.

The 34-year-old prince, whose grandfather is a brother of the current Saudi king, faces a possible life term in prison when he is sentenced on Wednesday.

The jury deliberated 95 minutes before returning its verdict.

Prosecutor Jonathan Laidlaw said the prince had abused his aide in the past, showing jurors a video shot in the Landmark’s elevator which appears to show the prince, dressed in white, throwing his 32-year-old servant around and battering him.

Photographs of Abdulaziz stored on a mobile phone “plainly proved” that there was a “sexual element” to the abuse, Laidlaw said.

Al Saud originally told police that he and Abdulaziz had been drinking into the early hours of the morning, and that when he awoke he could not rouse Abdulaziz.

Jurors rejected a claim by his defence lawyer John Kelsey-Fry that the prince was guilty only of manslaughter.

The prince was convicted of both murder and a second count of grievous bodily harm with intent relating to the attack in the elevator.

“Beneath the surface this was a deeply abusive relationship which the defendant exploited, as the assaults in the lift so graphically demonstrate, for sadistic reasons, for his own personal gratification,” Laidlaw told the jury.

“The abuse extended beyond physical abuse. There was plainly an emotional element and psychological element to it.”

The prosecutor said Abdulaziz surrendered meekly to the fatal assault.

“He was killed without apparently ever having fought back because the defendant was completely unharmed, without any mark at all, when he was examined at the police station. Bandar appears to have let the defendant kill him,” Laidlaw said. 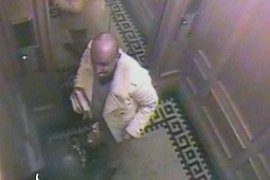