The death toll from heavy flooding in central Vietnam has climbed to 41, and officials warned that the figure could rise as the search for  at least 18 bus passengers swept away by high waters continues.

Hundreds of soldiers using boats and metal detectors were mobilised to search for the missing passengers and the bus on Tuesday, but efforts were hampered by raging currents.

“I think they are all dead,” Tran Van Long, a local police chief, told the AFP news agency. “The search will continue until the time we find the bus and the bodies.”

The bus was yanked off the main north-south road as it travelled through Ha Tinh province beside the swollen Lam River on Monday. Eighteen other people on the bus swam to safety or were rescued after clinging to trees and power poles.

Tran Dac Luc, a survivor, was quoted by the VnExpress news website as saying the bus floated at first, but then began to sink slowly as the driver tried to calm passengers.

“The driver asked everyone to stay calm so that he could try to drive onto the pavement,” he said.

When that did not work he asked people to break the windows, which would not open until he used a wrench, allowing several people to crawl out, he said. Luc escaped only to watch his son and niece climb free but retreat to the bus because they could not swim, VnExpress quoted him as saying.

“We looked at the bus sinking completely,” he said. “I have no hope for them to be alive.”

The national floods and storms control committee said the floods had submerged 200,000 houses and forced 142,000 people to flee.

“The disaster has left thousands of people in the province penniless after their assets were swept away in the flood waters,” Vo Kim Cu, the chairman of Ha Tinh’s local government, was quoted as
saying by the country’s Vietnam News.

“My house is flooded to the roof,” Nguyen Thi Mai, a Ha Tinh resident, said on national radio. “Officials gave us noodles and clean water today.”

The international Red Cross on Monday appealed for more than $1m in aid for victims of the flooding, the second major inundation to hit the central region this month. Earlier floods left at least 64 people dead in Quang Binh and other central provinces.

Forecasters predicted that Typhoon Megi, which slammed into the Philippines on Monday, would likely hit southern China and avoid Vietnam. 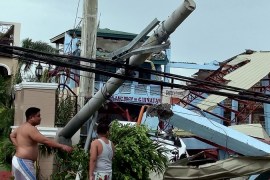 Chinese brace for storm that has killed 13 people and destroyed vast tracts of rice and corn crops in the Philippines. 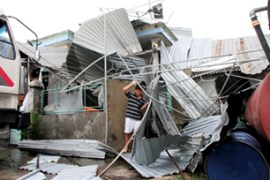