The Thai prime minister has appeared in court in a bid to stop his governing party from being banned.

Abhisit Vejjajiva was a witness for the defence on Monday at the Constitutional Court in what could be the final hearing in the case that centres on accusations of misuse of a 29-million-baht ($900,000) state grant in 2005.

He made no comments as he entered the courthouse amid heavy security in Bangkok.

The Democrat Party – Thailand’s oldest party – could be dissolved if found guilty while Abhisit, who was its deputy leader at the time the grant was allegedly misused, could be handed a five-year ban from politics, along with other executives.

In April, Thailand’s Election Commission (EC) called for the ruling party to be abolished over the accusations, as well as a separate case alleging an undeclared political donation.

The call coincided with the country’s worst political violence in decades, which left 91 people dead and almost 1,900 wounded in a series of street clashes between opposition protesters and armed troops.

The Democrats are accused of paying $770, 000 to advertising firms, despite only having permission to spend $635,000 on billboard marketing.

In another development, Abhisit has rejected accusations that a member of his party had attempted to influence the judiciary over the case.

Local media extensively covered on Monday the opposition’s allegations that a Democrat Party politician met an aide of a Constitutional Court judge in advance of the hearing – a meeting said to be have been captured on video.

Judicial rulings have played a pivotal role in shaping Thailand’s political landscape in the past.

The Democrats came to power two years ago after court decisions ousted allies of Thaksin Shinawatra, the former prime minister, who was himself ousted in a 2006 military coup.

Two prime ministers were also forced from office by the judiciary in 2008.

Uncertainty over the government comes at a difficult stage for the country, which remains divided in the wake of deadly protests by the opposition “red shirt” movement.

The red shirts accuse Abhisit’s government of being undemocratic because it came to power with army backing in a parliamentary vote after the controversial court rulings, and their protests have called for immediate elections. 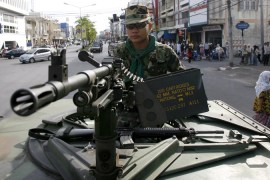