Two were shot as they were trying to escape from the roof of the national penitentiary in Port-au-Prince, the capital, while a third was trampled to death inside the facility, authorities said.

The hostages were later freed with minor injuries.

At least 100 UN police officers were inside the jail on Sunday when the riot occurred, with seven officers being injured, Joseph Felix Badio, the justice minister, told the Associated Press news agency.

Al Jazeera’s Sebastian Walker, reporting from outside the national penitentiary, said: “This is the building that was badly damaged in the earthquake and from which 4,000 prisoners escaped.

“There were reports this morning that something like a demonstration took place within the prison, seems to be more of a riot.

“The UN had to send in a rapid response force to free seven hostages taken prisoner by prisoners within the grounds of the jail. The hostages have all been released but there was something of a standoff and a lot gunfire. Shooting went on about an hour.”

About 1,500 prisoners are currently held in the jail.

An earthquake in Haiti in January, 2010, devastated the country already beset by poverty and past crises. More than 200,000 people died in the quake. 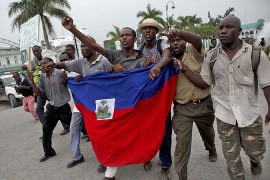 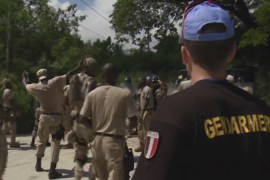 Haiti security tight ahead of poll

With so many eligible voters living in refugee camps as elections loom, there are security concerns.