Two Palestinians were killed and two others wounded in a pre-dawn Israeli air raid north of Gaza City, medics have said.

Adham Abu Selmiya, an official in the Hamas-run health ministry, said on Sunday that one of the men was killed immediately while the other succumbed to his wounds after being brought to a hospital.

The Israeli military said the air force had targeted a “squad of terror operatives who were preparing to fire rockets from the northern Gaza Strip into Israel”.

Local sources told Al Jazeera that the dead men, both in the early twenties, were fighters from a Salafist militant group, and not Hamas’ military wing.

The number of rockets fired from the Hamas-ruled territory declined sharply in the wake of a massive 22-day Israeli offensive in December 2008 and January 2009 during which about 1,400 Palestinians and 13 Israelis were killed.

However, since the start of this year, more than 165 rockets and mortar rounds have been fired at Israel, according to the Israeli army.

The rockets are believed to have been fired by smaller factions within the territory, while Hamas itself has taken steps to rein in such attacks.

The makeshift projectiles rarely wound anyone or cause damage. 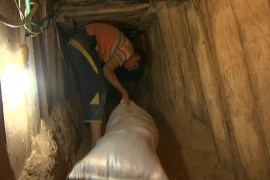 The network of tunnels in Gaza, long used to import life-saving goods, are being repurposed to export material to Egypt. 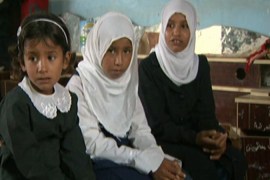