Brazil has adopted emergency measures to deal with one of the Amazon region’s worst droughts in decades.

A state of emergency has been declared in 25 towns as key waterways and rivers are left completely parched, the Amazonas state government said on Saturday.

So far, the severe months-long drought has affected 40,000 people in communities who depend on the South American rainforest for sustenance.

In response, the government has airlifted six tonnes of food
and 200 tonnes of donations to the stricken villages. However, according to officials, aid delivery has been slow due to the low water levels in rivers, which prevent large vessels from navigating them.

“The boats cannot navigate, and then the transportation can only be done by canoe. In some places, people were running out of food,” Anisio Saturnino, a representative of one of the municipalities under emergency rule, said.

Besides the lack of food, many people are suffering intestinal problems caused by poor water quality.

Ane Alencar, a researcher with the Amazon Institute for Environmental Research (IPAM), said the drought affecting the Amazon is an extreme weather event resulting from El Nino, which occurred in late 2009 with its fallout being felt this year.

She said the drought in the state of Amazonas has been more frequent and more intense than before.

Environmentalists say the severity of the drought was unexpected, but that dry weather like this will become more common due to climate change.

“There is already a climate change going on at some level. Greenpeace is tracking the impacts this can have on the Amazon, the impacts that the global warming – some two degrees – may bring to the Amazon, using as examples the years when those episodes are more severe. This year was out of the line,” Rafael Cruz, a Greenpeace worker, said.

The river’s shallow levels may affect trade along the Amazon River as transporters worry ships will run aground should the drought worsen.

Crops have also been damaged in the dry spell.

Scientists say the dry season will likely continue for another month, giving way to the rainy season at the end of November.

The dry weather is partly due to an intense hurricane season in the Atlantic Ocean. The storms suck moisture from the Amazon region, which make for more powerful sea storms. 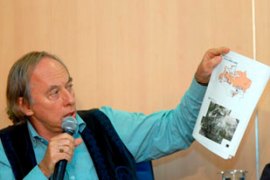 Data shows Brazil has met with some success in reducing logging in run-up to climate summit. 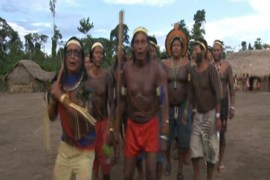 Indigenous groups say court move to halt plans for huge dam in Amazon will save many homes. 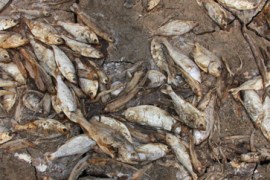 Thousands of fish perish as drought dries up the Amazon’s Manaquiri River. 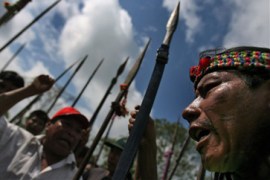 A look at the bitter struggle between the indigenous people of Peru and the government.