Four miners have been trapped underground after part of a gold mine collapsed in southwestern Ecuador near the border with Peru, government officials said.

A civil defence official told the AFP news agency that the miners were believed to be alive because they were located in an area far away from the collapse, although rescuers have been unable to contact them.

Friday’s incident at the mine near the Ecuadorian town of Portovelo comes after the successful rescue this week of 33 miners trapped for almost 70 days in Chile’s San Jose mine.

The collapse happened at 3:30am local time (08:30 GMT) and blocked a tunnel, trapping the workers at the fifth level of the mine, Jorge Espinosa, Ecuador’s deputy mining minister, said.

The condition of the men was unknown.

“It seems there was an increase in the amount of underground water,” Espinosa said, causing some of the gallery supports to buckle and “blocking any chance for an exit”.

He said that 50 rescue workers were digging out the main tunnel while others were preparing to possibly dig a hole from the side to reach the gallery where the miners are believed to be trapped.

A statement from the ministry of nonrenewable resources said a crisis committee is co-ordinating rescue efforts at the Casa Negra mine concession.

The miners are believed to be inside a galley 60 metres long, two metres high and 2.5 metres wide. The air and water shafts leading to the gallery are blocked, according to local media reports.

The mine, located 405 kilometers southwest of the capital, Quito, is owned by the local company Minesadco. Some 50 people work at the site. 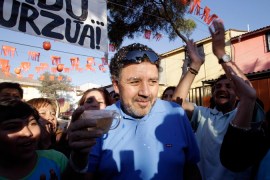 Most rescued Chile miners back home

Thirty-one of the rescued men given clean bills of health, while two remain in hospital for minor medical treatment.