The Hungarian government has seized control of the aluminium firm in charge of a plant that leaked toxic sludge over the countryside, killing eight people, leaving 150 injured and many more homeless.

A bill nationalising MAL Hungarian Aluminium Production and Trade Company was passed by the Hungarian parliament on Tuesday, with 336 votes in favour, one against and 13 abstentions.

The Budapest office of the alumina producer was also searched on Tuesday, as the police took over security responsibilities for the firm and gained control of its IT systems.

On Monday the managing director of MAL was detained for questioning in the country’s worst-ever chemical accident.

Viktor Orban, the prime minister, has blamed “human negligence” for the deadly spill.

The law says the commissioner – Gyorgy Bakondi, the national disaster chief – will “report directly to Viktor Orban, the Hungarian prime minister, and work under him for a period of two years”.

Orban’s spokesman explained that Bakondi’s main tasks would be “to prepare the resumption of operations at the site so as to safeguard jobs, to determine liability, launch the compensation process, and make sure no further accident occurs”.

Bakondi, for his part, said he would begin by taking a close look at MAL’s financial situation.

MAL has been accused of overloading a reservoir of toxic residue at its alumina plant in Ajka, 160km from the capital, Budapest.

The reservoir’s retaining walls burst a week ago, sending a tidal wave of toxic sludge through surrounding villages and across an area of 40 square kilometres (15.4 square miles) and polluting the Danube river and its tributaries.

The villages of Kolontar and Devecser were the hardest hit and at least eight people from Kolontar died in the disaster and 45 people remain hospitalised, two in very serious condition.

The company denies any wrongdoing but an investigation is under way to determine the exact causes of the spill.

Construction is nearing completion of a second dam to prevent a second spill from occurring in case of anticipated heavy rain later this week.

“The new dyke is practically ready. We just need to reinforce it with stones, because it will have to hold for decades,” Tibor Dobson, the head of the regional disaster relief services, said in a radio interview.

Around 800 villagers of Kolontar were evacuated on Saturday for fear of a second spill. They were informed on Tuesday that they would probably be able to return to their homes on Friday at the earliest, Dobson said. 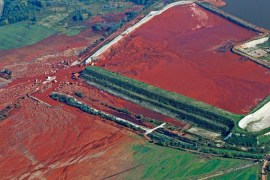 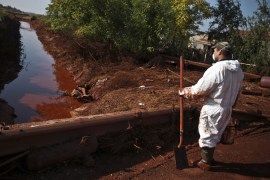 Despite efforts to plug a dam holding 2.5 million cubic metres waste water, officials say it is likely to collapse. 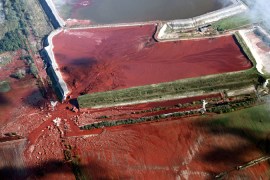 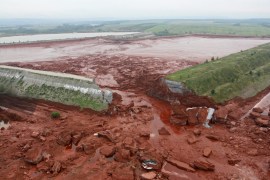