A court in Ecuador has issued an order authorising the jailing of 12 police while prosecutors investigate last week’s police uprising that Rafael Correa, the president, called an attempted coup.

A lawyer for police officers under investigation said on Friday that his clients were being swept up in a “witch hunt.”

Patricio Armijos, who is representing more than 50 agents, said the legal process was plagued with imprecisions and based on suspicions. Video evidence purporting to show the officers during the revolt is dark and unclear, he said.

“Some videos exist, but there is no certainty as to who is acting peacefully and who is not,” Armijos told Ecuavisa television. “It’s outrageous: Three to six years for those who were carrying weapons, and one
to three for those who did not.”

He called for the videos to be examined by forensic experts before they can be submitted as evidence, and for his clients to be given due process under the law.

After a hearing on Thursday, Tania Molina, the criminal court judge, ratified an arrest warrant that will let authorities hold 13 police officers in in preventive detention for 90 days.

Also being held was Fidel Araujo, an ally of Lucio Gutierrez, the former president whom Correa accused of inciting the uprising that left at least five dead and more than 200 wounded.

Prosecutors said hundreds more were under investigation for participating in the revolt, in which the president was besieged in a hospital by police protesting a plan to cut their benefits.

Some senior police officials have been forced to resign, but the mass of the force remains in place.

“We do not have a desire for revenge, but rather, a desire that the law simply be carried out and that peace return to the barracks,” he said.

The government has accused former president Gutierrez of orchestrating the police uprising, which ended with army commandos rescuing Correa from the hospital where he said he was held against his will by the rebellious cops.

Gutierrez has denied the allegations and said on Thursday that the unrest was staged by Correa in co-operation with his ally Hugo Chavez, the president of Venezuela.

“There was no attempted coup. It’s a farce. It was all a media show by Rafael Correa,” Gutierrez told Reuters news agency.

“The president was not kidnapped. He got orders from Hugo Chavez and I believe that it was Chavez who, after talking with Correa, spread the lie about being kidnapped.”

Correa’s popularity rose five percentage points to 58 per cent after the violence, according to a Cedatos-Gallup survey released on Tuesday. But only half those polled agreed with the government that the protests amounted to an attempted coup.

The unrest seems to also have eased Correa’s attempts to get legislation through congress, where some in his leftist Country Alliance party have been blocking government proposals. In its first session since the unrest, congress on Thursday granted initial passage to a bill aimed at tapping bank reserves. 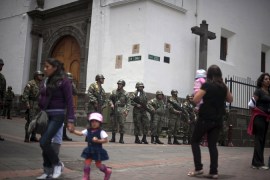 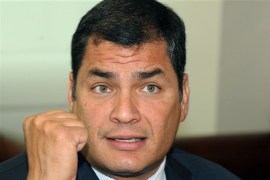 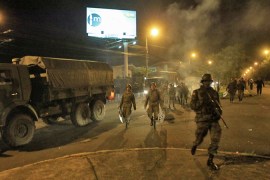 Snap analysis of the Ecuador mutiny

Correa is popular among the poor for spending oil cash on welfare programmes [AFP] The president of Ecuador has come out defiant after troops were called to free him from a hospital where renegade police, protesting against a law reducing their benefits, kept him under seize. But while it was not clear whether there was a […] 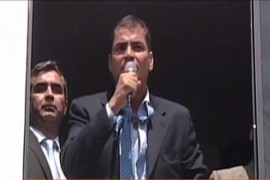