The abduction of the man, who has not yet been named, on Thursday came just hours after envoys from the UN Security Council arrived in the region.

“They tied up two of them and made away with the other two in a vehicle. One man escaped and the other is still missing,” he said.

Saiki said the missing man was not Sudanese but would not release any other personal details.

Bashir supporters briefly stopped the UN envoys from leaving El-Fasher airport in north Darfur as they arrived to raise concerns about renewed clashes in the region where the United Nations estimates about 300,000 people have died since 2003.

UN peacekeepers on jeeps with rocket-propelled grenade launchers and heavy machine guns guided the envoys’ convoy across the desert roads to the UN base.

They arrived hours after government forces said they launched an attack on Abdelwahid Nur’s faction of the Sudan Liberation Army in the eastern Jebel Marra district about 160 kilometres away.

A government spokesman said seven rebels were killed and government troops had retaken control of a key road.

The rebels confirmed the fighting but denied they had lost control of the sector, which has been the scene of heavy fighting over the past 10 days.

Ambassadors and senior representatives from the 15 nations on the UN Security Council, including the five permanent powers – Britain, China, France, Russia and the US – are on a four-day mission to Sudan to observe the troubled preparations for a self-determination referendum on January 9 and to visit Darfur.

Mark Lyall Grant, Britain’s ambassador, said the aim of the Darfur leg was “very clear,” and the envoys would “express our concern at the continued violence in Darfur.”

He said the ambassadors would urge all sides to halt the violence and would support the floundering Darfur peace process. Susan Rice, the US ambassador, has also raised her concerns about a “disturbing uptick” in the Darfur conflict.

The ambassadors will on Friday visit one of the giant Darfur refugee camps before going to Khartoum, Sudan’s capital, for the final leg of their mission.

The delegation had said they did not intend to meet with Bashir because of the charges against him. They will meet only Sudan’s foreign minister before leaving on Saturday.

Bashir will fly to Libya on Friday to attend Arab League and Arab-African meetings over the weekend. 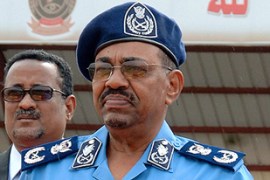 UN and Red Cross workers expelled from West Darfur for mistakes “beyond their mandate”. 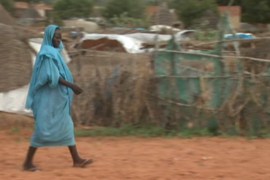 Pledges to fight poverty in Sudan’s western region not kept by international community. 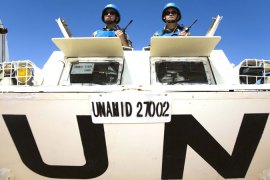 More than 40 killed in Darfur region by violence blamed on rebel groups and government-backed militia at refugee camps.