A suspected US drone strike has killed eight fighters in northwest Pakistan, with Pakistani intelligence officials saying that at least five of them were Germans.

They also said that the fighters killed in the attack in Mir Ali, North Waziristan, on Monday were members of the Jihad Islami group and the Germans were of Turkish origin.

Details of the incident could not be independently verified and both the US and German governments have yet to comment on the strike.

Al Jazeera’s Kamal Hyder, reporting from the Pakistan capital Islamabad, said at least three women were also killed in the raid. There are reports of some children being killed too, he said.

“What is raising the alarm bells here is that despite the fact that there may be some evidence to suggest that these people are indeed militants, Germans in this case … there is, of course, this apprehension that most of the time these strikes are taking place not caring about the civilian casualties.”

Matthias Gebauer, the chief correspondent for German news magazine Der Spiegel, told Al Jazeera that while finding verified information on the attack had been difficult, news that German citizens may be among those killed in the strike “did not come as a big surprise”.

“Because we know that about a couple of dozen German Islamists went from Germany to the Pakistani tribal belt, especially to Mir Ali,” Gebauer said.

There are reports that al-Qaeda’s leadership, increasingly restrained by missile strikes from US drones in northwest Pakistan, prizes such “home-grown” recruits as they have Western passports.

Pakistan’s northwest region is seen by the US as a training ground for fighters. It has been hit with 21 drone attacks in September alone, the highest number in a single month.

Besides al-Qaeda fighters, the CIA has been trying to eliminate leaders of the Haqqani network, an Afghan Taliban faction operating out of North Waziristan.

Monday’s attack came a day after the US and the UK warned of an increased risk of terrorist attacks in Europe.

The alerts about possible attacks in Europe highlight concern that growing numbers of fighters are going from the West to remote war zones for training with al-Qaeda.

Al Jazeera’s Tania Page, reporting from Hamburg, said the “Muslim community is wary of the growing scrutiny in the media and perceptions in the city.”

The immediate trigger for Sunday’s travel alerts was intelligence about a plot against European targets reportedly originating with a group of individuals in northern Pakistan, some of them believed to be European citizens.

Few details of the conspiracy are known. But the plot appears to be of the kind that Western officials believe poses the most significant danger – the use of so-called self-radicalised individuals with no previous record of extremism. 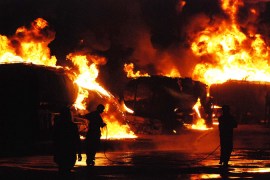 Twenty Nato lorries destroyed in the third attack on the crucial supply route between Pakistan and Afghanistan. 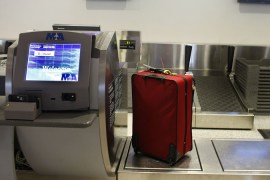 US president orders state department to “spare no effort” in warning Americans of possible al-Qaeda attacks in Europe.