Lebanon’s largest parliamentary bloc has expressed concerns at a planned visit of the Iranian president to the country on October 13.

In a statement issued on Friday, the March 14 alliance described Mahmoud Ahmadinejad’s upcoming visit as a “provocation.”

The Iranian president is scheduled to hold talks with his counterpart, Michel Sleiman, who invited him, as well as Prime Minister Saad Hariri and parliament speaker Nabih Berri.

Ahmadinejad is also due to meet with Hassan Nasrallah, the leader of the Shia group Hezbollah, a key ally whose powerful party is widely considered a proxy of Iran.

The Iranian president is expected to tour the predominantly Shia southern Lebanon.

The leaders of the March 14 coalition believe that Iran is using Lebanon in its confrontation with the West and Israel, and that Ahmadinejad’s visit is meant to a message to Israel.

“The message is that Iran is at the border with Israel,” said Fares Souaid, coordinator of the March 14 alliance.

“Ahmadinejad, through this visit, is saying that Beirut is under Iranian influence and that Lebanon is an Iranian base on the Mediterranean,” said Souaid, whose coalition is led by the Western- and Saudi-backed prime minister. “His visit to the south would be a provocation; He does not need to go there,” he added.

Souaid also pointed out Ahmadinejad is coming to Beirut at a time when the West is backing the continuation of fledgling peace negotiations between Israel and the Palestinians.

“The Iranian president is here to say that Lebanon is a land of resistance and to reaffirm his project of a continuous war with Israel,” he said.

Lebanon’s southern border region with Israel is largely controlled by Hezbollah and was devastated during the 2006 war between the militant party and the Jewish state.

Ahmadinejad will tour the villages of Qana and Bint Jbeil as well as a war museum in the region inaugurated by Hezbollah earlier this year, a Hezbollah official told AFP on condition of anonymity.

The Lebanese Shia have welcomed the prospect of Ahmadinejad’s visit.

“This will be a message to the United States and Israel that they need to understand there is a regional force backing Lebanon,” said Sheikh Ali Yassin, a local imam in the southern coastal city of  Tyre.

In Israel, a foreign ministry spokesman said the Iranian leader’s visit was cause for concern.

“We have heard that Ahmadinejad is preparing a serious tour…  (like) a big landowner coming to inspect his property,” Yigal Palmor told AFP.

“He has already said to Syrian President Bashar al-Assad that south Lebanon was Iran’s border with Israel,” he added.

“All this should be very worrying for anyone who is concerned about the stability of Lebanon and of the Middle East.”

The visit will be Ahmadinejad’s first to Lebanon since his 2005 election.

It comes amid heightened tensions in the country over unconfirmed reports that a UN-backed tribunal, probing the 2005 assassination of Hariri’s father – ex-premier Rafiq Hariri – is set to indict Hezbollah members in connection with the murder.

There are fears that should the Special Tribunal for Lebanon implicate Hezbollah, the move would lead to sectarian clashes similar to the ones that brought Lebanon close to a civil war in 2008.

Iran’s ambassador to Lebanon, Ghazanfar Roknabadi, said this week that Ahmadinejad’s visit was aimed at promoting unity among the Lebanese people.

After the 2006 Hezbollah war with Israel, Tehran has heavily financed the reconstruction of southern Lebanon and, more recently, it offered military aid to the country.

That offer came in the wake of a US freeze in its military aid to Beirut over concerns that the weapons could be used by Hezbollah.

The group is blacklisted by Washington as a terrorist organisation.

The United States and its allies have also been embroiled in a long-running dispute with Iran over its controversial nuclear programme, which Tehran insists is for peaceful purposes. 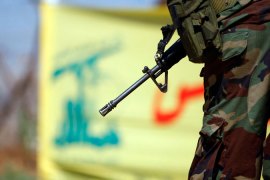 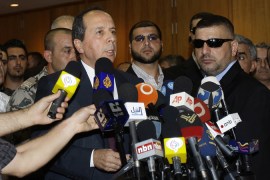 Former general Jamil al-Sayyed says he would respond to court summon only if Lebanon’s judiciary is ‘de-politicised.’ 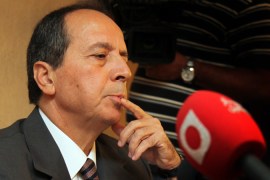 Move comes after Jamil Sayyed, who spent four years in jail, launched a harsh attack on Saad Hariri and his government. 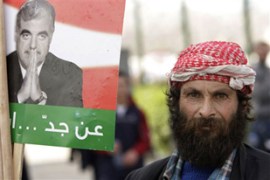 Lebanese group says it handed over data that would implicate Israel in the 2005 killing.