Rafael Correa, Ecuador’s president, has returned to work a day after troops rescued him from a hospital where he had been trapped by police officers protesting over plans to cut their benefits.

Ecuador’s capital, Quito, was peaceful on Friday after a day of unrest that culminated in a gunfight outside the hospital, but Ricardo Patino, the foreign minister, warned that the situation might not yet have been completely dealt with.

“We cannot claim total victory. We have overcome the situation for now, but we cannot relax,” Patino told reporters.

“The coup attempt may have roots out there, we have to find them and pull them up.”

Correa has blamed Lucio Gutierrez, a former president who was himself ousted during protests, for the uprising on Thursday, saying that it was an attempt to force him from power.

Gutierrez denies any role in the protests and many analysts have suggested that the officers were unlikely to have been trying to topple Correa, but for several hours on Thursday it was feared that the president could be removed from power as three other presidents were in the decade before he came to power in 2007.

Correa was trapped in the National Police Hospital in Quito after being teargassed as he attempted to address protesting police officers at a barracks in the city.

He was holed up in the building for several hours as his supporters clashed with the police outside and officers inside attempted to persuade him to revoke a law which cut their bonus payments. The unrest, which also saw airports closed and roads blocked, ended late on Thursday after the military moved against the police.

Officials said on Friday that four people had died and nearly 200 others had been injured in the violence.

Al Jazeera’s Monica Villamizar said the situation in the Ecuadorean capital was stable but a state of emergency, which gives greater powers to the military, remained in place.

“The current situation is quite calm. It seems that President Correa has the country in control again,” she said.

Gustavo Jalkh, the interior minister, said police forces had returned to work on Friday after “an unfortunate, critical, chaotic” day.

Only 600 officers out of a force of about 40,000 took place in the violence, according to Edwin Jarrin, the deputy interior minister.

The chief of the police has resigned saying that he did not order the aggression against the president but had been “disrespected” and “mistreated” by his officers.

“A commander shown such lack of respect by his subordinates cannot stay in charge,” Freddy Martinez said

A civil service law passed on Wednesday by congress would end the practice of giving soldiers and police medals and cash bonuses with each promotion, as well as extend the intervals between promotions.

The law has angered police and soldiers who earn well under $1,000 a month.

A delegation of Latin American foreign ministers arrived in Quito on Friday to show their support for Correa.

“The bottom line is that this was an attack on democracy and progressive governments in Latin America,” Hector Timerman, the Argentine foreign minister, said.

Correa, who has been in office since 2007, was re-elected last year to a second term as president of the country of 14.5 million people. 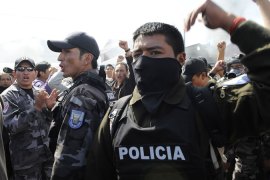 President accuses the opposition of an attempted coup after being hospitalised as police protested over benefit cuts. 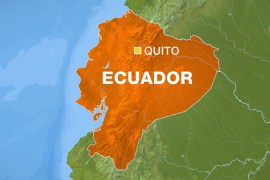