In the first raid on Saturday, nine people were reportedly killed after missiles hit a house in the Datta Khel area, close to the Afghan border.

Seven others were killed in another raid in the same region later in the day.

Datta Khel has been the scene of several US raids on Taliban and al-Qaeda fighters and their local supporters who are accused of targeting Nato and US forces in Afghanistan.

Over the past five weeks, the US is believed to have launched at least 22 missile attacks in Pakistani territory. Western officials have said some of the drone attacks have been aimed at disrupting a “terror plot” against European cities.

A surge in missile strikes together with Nato operations along the Pakistan-Afghanistan border suggests Western forces are cracking down on fighters who easily move between the porous boundary.

Though Pakistan has officially condemned the drone raids, some say Islamabad secretly provides intelligence for them.

The raids are deeply unpopular among the Pakistani public due to the civilian casualties they have caused.

“The government, on the other hand, is heavily dependent on the Americans and cannot afford to lose that ally,” Al Jazeera’s Kamal Hyder, reporting from Islamabad, said.

“So while they’re condemning it [drone attacks], they are in a way giving an agreement to the Americans to continue. Otherwise the Pakistani military would be at least attempting to shoot down the drones.”

Public outrage has also risen over recent Nato incursions from across the Afghan border. It hit a peak on Thursday, when two Nato helicopters crossed into Kurram tribal region and killed three Pakistani paramilitary soldiers they believed were firing at them from the ground.

In apparent retaliation for the killings, Pakistan has cut off a key US and Nato supply line on its soil. On Saturday, about 150 lorries were still waiting for Pakistan to reopen the border crossing at Torkham so they could deliver their supplies to Western troops in Afghanistan. 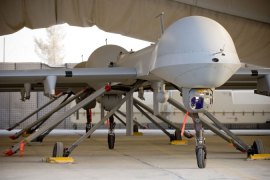 At least three suspected US drone attacks in the Pakistani tribal region of South Waziristan kill at least 28 people. 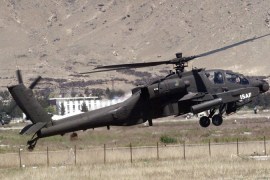 Rare manned pursuit of suspected fighters across the border from Afghanistan leads forces into Pakistani soil.