At least 36 people have been killed after two trains collided in central Indonesia, officials have said.

Another 30 others were wounded, many with broken bones and burns, in the accident near Pemalang, a city on the northern coast of Central Java province, early on Saturday.

A train from the capital, Jakarta, crashed into the back of another waiting at Petarukan station, causing severe damage to both trains.

Many of the dead and injured were trapped in three carriages, which had derailed and flipped over.

All of the passengers had been freed from the train, according to a spokesman for the transport ministry.

Local media reported that rescue workers were late to arrive at the scene and lacked equipment to free passengers trapped in the wreckage.

“The number of victims could still increase because the evacuation is ongoing,” Bambang Ervan, a transport ministry spokesman, told Antara news agency.

“The hospitals are quite small in that area and severely understaffed,” she said.

“People have been brought to four or five hospitals. The doctors and nurses are complaining that they can’t cope with that many patients so people have been left unattended. They don’t have enough medication, so people have actually been asked to go to other places to find help.”

Hasan, the police chief, said the collision was likely caused by a signal error.

“The suspected cause of the accident was a mistake in the traffic management system,” he said.

“We’re still investigating to see if it was due to negligence of the driver or because signalling equipment on one of the trains was faulty,” he said.

Sugeng Priyono, a spokesman for the national railway PT Kereta Api Indonesia, said the Argo Bromo Anggrek train was travelling from Jakarta to the East Java provincial capital of Surabaya, when it ploughed into the stationary Senja Utama train before dawn.

“The Petarukan station is where double tracks change to a single track. Initial report is that the Argo Bromo Anggrek train had not yet been given permission to go ahead when it hit the other train,” he said.

“However, this is still under investigation, so there could be other causes.”

Al Jazeera’s Vaessen said that although this was the first big rail crash for some time, accidents on the country’s rail network were not uncommon.

“There have been many accidents in the past, many train collisions like this, because many of the Indonesia lines are single track so it is very prone to accidents.”

Metro TV and El Shinta radio reported that another passenger train had crashed in the town of Solo on Saturday, killing at least one person. 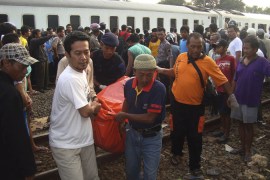 Hundreds have died in a series of plane, train and ferry accidents in recent years. 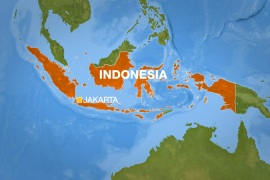