Muslims around the world have been urged to mobilise more aid for Pakistan’s flood victims in a new audio message purportedly from Osama Bin Laden.

The 13-minute unauthenticated audio tape, issued on Islamist websites on Saturday, is said to be the second tape to be released by the fugitive al-Qaeda leader in two days.

In a speech entitled “Help Your Pakistani Brothers,” the al-Qaeda leader focuses on the reluctance of Arab and Muslim countries to help Pakistanis, singling out Gulf states, Malaysia and Turkey, the US-based Intelligence Group Site said.

In the recording, the speaker says more people are affected by climate change than wars, and refers to recent flooding in Pakistan.

“The response did not match the level of the disaster,” he said.

He said Arab and Muslim leaders had not paid any visits to flood-hit areas unlike Ban Ki-moon, the UN secretary-general, and added Arabian Peninsula’s oil wealth should be used as it “belongs to all Muslims”.

Saturday’s audio tape is the second in two days. On Friday, Bin Laden expressed concern about global climate change and flooding in Pakistan in a 11-minute audio message.

“The number of victims caused by climate change is very big … bigger than the victims of wars,” the voice said – his first public comments since March, but its authenticity has not been confirmed.

Paul Pillar, a former US intelligence official, said that the message by “Bin Laden” was aimed at polishing his battered image among Muslims.

He aims “to counteract his loss of support among people who have come to perceive him as an uncaring terrorist who has no hesitation about spilling the blood even of fellow Muslims,” Pillar said.

Bin Laden’s whereabouts are unknown, but in August, General David Petraeus, the US commander in Afghanistan, said he is “far buried” in the remote mountains between Afghanistan and Pakistan and that capturing him remains a key task.

Bin Laden is the world’s most-wanted man, with the US offering a reward of up to $25m for information leading to his capture. 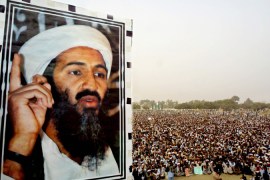 In an unauthenticated tape, a voice purported to be that of Osama bin Laden’s expresses concern over climate change.