“It took time to search inch-by-inch until they managed to hunt them down.”

The killing on Wednesday, Christmas Eve in the Christian Coptic calendar, sparked clashes between thousands of angry Copts and police.

Fighting erupted outside a hospital morgue where the bodies of the Christians killed the previous day were kept, the official said.

The six male churchgoers and the Muslim security guard were shot dead by three men in a car as the Christians left a late night mass, witnesses said.

Al Jazeera’s El-Khaky said that one of the men arrested over the attack was “believed to be a relative of a Muslim girl who was allegedly raped last November”.

“It is believed that this attack was in retaliation for the rape of the girl,” he said.

“Now that he and his accomplices are in [police custody] the investigations are going to start to find out the real motives for the crime.”

A Christian man has been arrested over the alleged rape of the girl and is in custody awaiting trial.

Bishop Kirollos of the Nagaa Hammadi Diocese said he was concerned about violence on the eve of Coptic Christmas because of previous threats following the rape of the girl.

He said that he had received a message on his mobile phone saying: “It is your turn.”

“I did nothing with it. My faithful were also receiving threats in the streets, some shouting at them: ‘We will not let you have festivities’,” he said.

Kirollos said he ended his Christmas Mass one hour earlier than normal because of the threats. 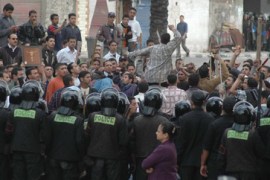 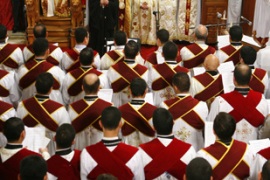