1979: The then Soviet Union invades Afghanistan. In the years that follow Moscow will rule Kabul by proxy while the US, Pakistan, China, Iran and Saudi Arabia extend their support to anti-communist Muslim fighters, the Mujahideen, who oppose the Soviets.

1992: Led by Ahmed Shah Massoud, Mujahideen forces remove the Soviet-backed government, but in the years that follow rivalry between different groups of fighters reduce Kabul to rubble and effectively plunge Afghanistan into civil conflict.

1994: Mullah Mohammed Omar, a Muslim cleric, sets up Taliban movement of Islamic students who take up arms to end the chaos in Afghanistan. They capture Kandahar and advance on Kabul.

1996: The Taliban takes Kabul and hangs Mohammad Najibullah, the then president. The year also sees the return to Afghanistan of Osama bin Laden, al-Qaeda’s leader who fought with Mujahideen groups against the Soviet occupation.

1998: The US launches missiles at suspected bin Laden bases in the country in retaliation for the bombing of US embassies in Kenya and Tanzania.

1999: The UN imposes an air embargo and freezes Taliban assets in an attempt to force them to hand over bin Laden for trial.

2001: Taliban rule in Afghanistan, based on their strict interpretation of Sharia, or Islamic law, has become increasingly proscriptive, restricting women and religious minorities, banning satellite TV and destroying  some 2,000-year-old Buddhist statues in the cliffs above Bamiyan.

In September, the Taliban’s rival Ahmed Shah Massoud, a senior commander of the so-called Northern Alliance, is wounded in a suicide attack and later dies of his wounds.

Attacks on the United States on September 11 leads George Bush, then US president, to demand the Taliban hand over bin Laden. They refuse unless evidence of his involvement is presented.

In October, US and British forces begin bombing Afghanistan and within weeks mount an invasion. Later Hamid Karzai, an Afghan tribal leader, will be chosen to head an interim administration.

2002: The first contingent of international peacekeeping forces takes up its duties. Months later Haji Abdul Qadir, the Afghan vice-president, is assassinated in Kabul. Karzai escapes a separate assassination attempt in his hometown of Kandahar.

2003: Despite frequent incidents of violence, Donald Rumsfeld, then US defence secretary, claims that most of Afghanistan is secure and that US-led forces had moved from major combat operations to stabilisation and reconstruction projects.

The year also sees Nato take control of security in Kabul. It is the organisation’s first security operation outside of Europe.

2004: Afghanistan adopts a new constitution and Karzai is elected president. Meanwhile, the Taliban begins to regroup and mounts a sustained campaign of attacks.

2005: Afghanistan holds it first parliamentary elections in more than 30 years, but Taliban attacks continue to grow in intensity.

Later in the year, Nato takes over responsibility for security across the country. Meanwhile, civilian casualties have been mounting and when a US military vehicle crashes, killing several civilians, widespread anti-US protests erupt.

2007: Nato and Afghan forces launch Operation Achilles, reported as their largest offensive to date and in May Mullah Dadullah, the Taliban’s chief military commander, is killed. The UN reports opium production in Afghanistan, much of which is thought to fund the Taliban, has reached record levels.

2008: A Taliban operation frees hundreds of its fighters from Kandahar prison. Weeks later a suicide attack on the Indian embassy in Kabul ramps up regional tensions as India accuses the Pakistani intelligence agency of involvement. Pakistan denies the allegations.

Towards the end of the year, US President Bush sends and additional 4,500 US troops to Afghanistan. Germany also boosts its troop numbers and extends its mission in the country.

2009: The election of Barack Obama, the US president, had prompted hopes of a new approach to Afghanistan, but Taliban attacks make the year the bloodiest yet for international troops.

Meanwhile, Afghans go to the polls to elect a new president and while the Taliban largely fails to act on its threats to attack voters, the election is beset by massive fraud. Karzai wins a runoff vote after Abdullah Abdullah, his main rival, withdraws.

In December, Obama agrees to a request by his generals to boost US troop levels in Afghanistan. He supplies 30,000 troops, bringing the total number of US troops in the country to 100,000, but he also announces that the US will begin withdrawing its forces by 2011.

2010: While Karzai struggles to get his cabinet nominees approved by parliament, Taliban fighters carry out co-ordinated attacks in the capital.

Delegates gather in London for a conference on future strategy in Afghanistan, including a proposal to negotiate with Taliban supporters and persuade them to lay down their arms in return for money and jobs.

In February, US-led Nato troops launch Operation Mushtarak on the biggest Taliban-held town in the south of the country. 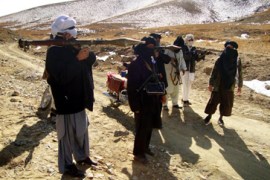 Al Jazeera examines the West’s attempts at engaging the group in Afghanistan.