“Nobody should be imprisoned for peacefully expressing their opinions,” Lewis said.

“Freedom of expression and the free flow of ideas are essential for a flourishing economy and society. Verdicts like these only serve to harm Vietnam’s international standing.”

The trial in Vietnam’s commercial hub lasted about eight hours. The convictions and sentences took longer to read before the court than the recess during which they were written.

“There are serious concerns about the whole process,” Peter Lysholt Hansen, the Danish ambassador, told reporters.

Hansen was one of a small number of diplomats granted permission to watch the trial with journalists via closed-circuit television in separate room.

“We will very strongly urge the government of Vietnam to grant amnesty to all four,” he said.

Months before the trial began state media reported that the accused had all admitted their guilt.

In court, Le Cong Dinh did admit to joining the banned Democratic Party of Vietnam, but asked for leniency.

“I did not have the intention of overthrowing the people’s administration and I also did not have a hostile attitude toward the state,” he said, adding that he had been influenced by Western ideas during his time abroad.

According to analysts, observers see their case as linked to next year’s Communist Party Congress, when high-ranking leadership posts will be determined.

London-based human rights organisation Amnesty International said the convicted men were “prisoners of conscience” and called for their immediate release.

“The trial made a complete mockery of justice, disregarding fundamental human rights such as the principle of presumption of innocence and the right to defence,” Brittis Edman, Amnesty’s Vietnam researcher, told AFP news agency.

“The prosecution gave no evidence to support the indictment.” 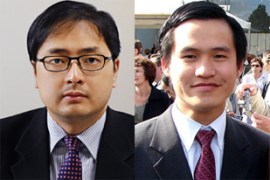