Most will now be allowed to return home but a six-kilometre danger zone remains in force around the volcano, meaning around 3,000 people will have to remain in evacuation camps.

Despite the volcano appearing to have settled into a more moderate eruption phase, Renato Solidum, the director of the Philippine Institute of Volcanology and Seismology, says danger still remains around Mount Mayon.

“The situation could change and we could raise the alert level again. This is what happened in 2001 when Mayon paused for a long time and then resumed erupting,” Solidum said.

Mayon is the most active of 22 volcanoes dotted across the Philippines. In the latest eruption, lava flowed from the dome of the 2,460-metre Mayon for more than two weeks, with clouds of ash ejected up to 2km into the sky.

Located about 330km southeast of Manila, the Philippines capital, Mayon has erupted 48 times in recorded history. 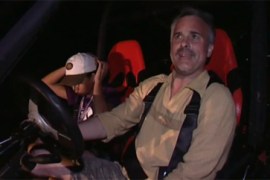 Villagers spend New Year’s Day in shelters in the shadow of volcano. 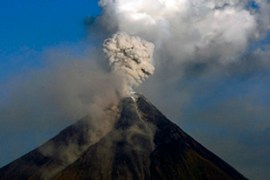 Concerts organised to keep Filipinos from returning to their villages near volcano. 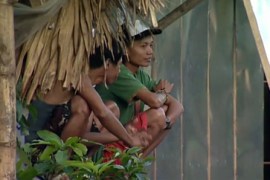 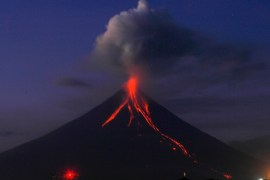