“This is very bad … for the overall look of the United States outside its borders. It’s very important for the Americans to realise that this will work against their interests in Iraq and other places.”

Ali al-Dabbagh, the Iraqi government spokesman, said in a statement: “The Iraqi government will follow up on this issue in strength and resolution to bring those murderers of Blackwater to accountability in order to return the rights of iraqi people who are the victims of this crime.”

He said “the investigations carried out by the specialised Iraqi authorities confirmed with no doubt that the guards of Blackwater company have committed a criminal murder act and they have violated the combat environment rule to use force while there was no threat against them”.

Ricardo Urbina, a district judge, dismissed the charges against the five men on Thursday, saying US justice department prosecutors improperly built their case on sworn statements that had been given under a promise of immunity.

Urbina said the government’s explanations were “contradictory, unbelievable and lacking in credibility”.

The Iraqi government wanted the guards to stand trial in Iraq and officials there said they would closely watch how the US judicial system handled the case.

Dean Boyd, a spokesman for the US justice department, said the department was “obviously disappointed by the decision”.

Prosecutors can appeal the 90-page ruling and Boyd said the department was “still in the process of reviewing the opinion and considering our options”.

Al Jazeera’s Rosiland Jordan explained that the judge did say that the case can be brought back to court without prejudice but it was going to be difficult for the justice department to build the case from scratch without using the defendants’ statements.

Blackwater Worldwide, which had been hired to guard US diplomats in Iraq at the time, has since changed its management and name to Xe Services.

Despite a string of investigations following the deadly shooting and in spite of an Iraqi government ban on the company, the US state department extended a contract with a subsidiary of the firm in September to continue providing security to US diplomats in the country.

The five guards, Donald Ball, Dustin Heard, Evan Liberty, Nick Slatten and Paul Slough, all formerly in the US military, had been charged with manslaughter and weapons charges, which carried mandatory 30-year prison terms.

It was unclear what the ruling means for a sixth Blackwater guard, Jeremy Ridgeway, who had pleaded guilty to killing one Iraqi and wounding another.

Defence lawyers said the guards were thrilled by the ruling after more than two years of scrutiny.

“It’s tremendously gratifying to see the court allow us to celebrate the New Year the way it has,” said lawyer Bill Coffield, who represents Liberty.

“It really invigorates your belief in our court system.”

Ball’s lawyer, Steven McCool, said “it feels like the weight of the world has been lifted off” his client’s shoulders”.

“Here’s a guy that’s a decorated war hero who we maintain should never have been charged in the first place,” he added.

Urbina’s ruling does not say whether the shooting was proper, only that the government improperly used evidence to build the case.

The guards claimed to have acted in self-defence after a convoy they were protecting near Nisour Square came under attack.

Witnesses, however, said the men unleashed an unprovoked attack on civilians using machine guns and grenades.

After the shooting, the US state department had ordered the guards to explain what happened.

Investigators promised the men that their statements were to be used only for the internal inquiry and would not be used in a criminal case.

Such limited immunity deals are common in police departments so officers involved in shootings cannot hold up internal investigations by refusing to co-operate.

The deal meant that prosecutors had to build their case without using those statements, something Urbina said the justice department failed to do.

Prosecutors read those statements, reviewed them in the investigation and used them to get search warrants, Urbina said. 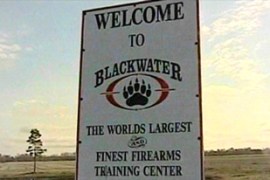 Prosecutors want charges dropped against one of the accused in the 2007 Iraq shooting case. 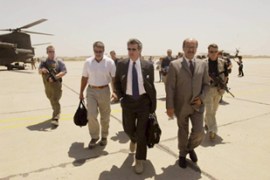 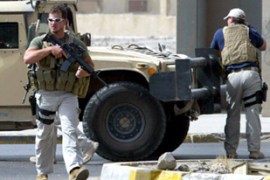