“They emanate from the British anger towards the rallies in which millions of Iranians took part to condemn British interference in [Iran’s] internal affairs,” Ramin Mehmanparast, a foreign ministry spokesman, was quoted as saying by Al-Alam, a state-controlled news channel.

Gordon Brown, the British prime minister, spoke to Nouri al-Maliki, his Iraqi counterpart, on Thursday “to thank him for his efforts in the release of the British hostage Peter Moore”, Brown’s office said in a statement.

There has been speculation that a deal was done to secure the release of Moore after it emerged that the leader of the group which took the men from a government building in Baghdad was being transferred from US to Iraqi custody.

The BBC also quoted General David Petraeus, the former US commander in Iraq, as saying he was “90 per cent certain” that the hostages were held in Iran for part of their time in captivity.

Petraeus was quoted as telling a correspondent earlier this month: “I’m pretty sure I’ve seen hard intelligence on it.”

Moore was targeted because he was installing a computer tracking system that would show how large amounts of international aid money to Iraqi institutions was being diverted to Iranian militia groups in Iraq, the Guardian said.

It said a former unnamed Revolutionary Guard had said the five were held in two camps in Iran.

“It was an Iranian kidnap, led by the Revolutionary Guard, carried out by the al-Quds Brigade,” he was quoted saying.

An unnamed Iraqi government minister backed up the claims, telling the newspaper: “This was an IRG (Iranian Revolutionary Guard) operation.”

But Sami al-Askari, an Iraqi politician who the Guardian suggested had flown to Iran to meet the kidnappers, denied this to the BBC, while acknowledging that he was involved in talks with the hostage-takers in Iraq.

A spokesman from Britain’s foreign ministry said: “We have seen speculation that Iran is directly involved in this case.

“Iran of course has an influence in Iraq, but we have no evidence to substantiate claims of direct involvement in this case.”

Amid speculation, denied by Britain, that a deal was done to secure Moore’s release, the US confirmed on Thursday that the leader of the group behind the kidnapping was being transferred to Iraqi custody.

“The United States has complied with an Iraqi government request in accordance with the US-Iraqi Security Agreement and the rule of  law to transfer AAH (Asaib al-Haq) members, to include Qais al-Khazaali, from US custody to Iraqi custody pursuant to an Iraqi arrest warrant,” a US spokesman said.

Although it was not immediately clear if al-Khazaali was still in US custody, the BBC reported that he had been handed over “very recently”.

Pauline Sweeney, Moore’s stepmother, said that Moore had thought he was about to be shot shortly before being set free.

A first photo since Moore’s release showed him looking relaxed in the grounds of Britain’s Baghdad embassy. 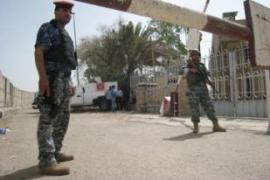 Computer expert kidnapped in 2007 said to be in good health after being set free. 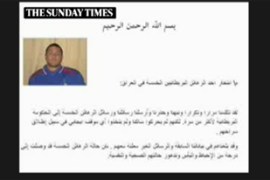